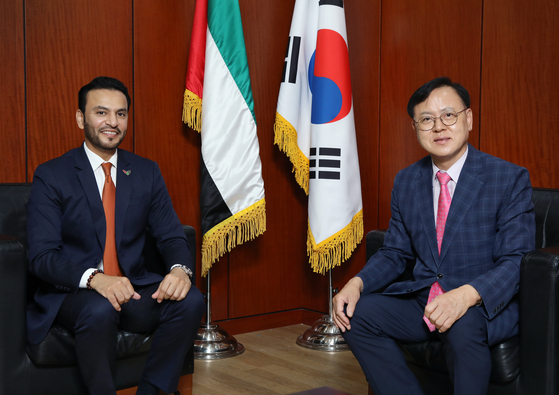 As individuals, governments and companies are called to make greener choices in how they live, do business and “build back better” in the ongoing pandemic, the top Emirati envoy in Seoul says the United Arab Emirates and Korea may have already taken their first steps together on that trajectory years ago.

“The Barakah Nuclear Power Plant is proceeding smoothly — Unit 1 of the plant successfully entered commercial operation in April 2021 [and] Unit 2 is set to be commissioned and operated,” said Abdulla Saif Al Nuaimi in speaking with the Korea JoongAng Daily at the embassy on Sept. 10.

Korea entered into an agreement with the U.A.E. to build the country’s first nuclear power plant in Abu Dhabi in 2009. Once the construction of the third and fourth units of the plant is completed, they will be able to cover 25 percent of electricity generation in the U.A.E., according to the Emirates Nuclear Energy Corporation.

The launch of the nuclear power project between the two countries was the beginning of an expanded cooperation since, the envoy recalled, as the two countries’ relations have been elevated twice within a decade and came to include regular foreign and defense vice-ministerial meetings and high-level consultations on nuclear energy.

To People Power Party Rep. Lee Myoung-su, who heads the Korea-U.A.E. parliamentary association this year, the U.A.E. policies on renewables as well as in regional peace and security pose several takeaways for Korea.

“When I visited Dubai around two decades ago, my trip was centered around the construction projects that Korea was part of,” he told the paper at the embassy. “I was surprised to see the level of modernity of these structures, and thought that the country is an icon of innovation when it comes to architecture. But I realized last year that this image of the U.A.E. applies even to its foreign policymaking in the region as well.”

Lee was speaking of the Abraham Accords reached among the U.A.E., Israel and the United States in August 2020, followed by the normalization of ties between the U.A.E. and Israel. Predecessors of such an accord between an Arab state and Israel date back to 1979 when Egypt signed an agreement with Israel, and to 1994 when Jordan did.

“The agreement poses a question on the role that Korea could play in its region as a peacemaker,” Lee said, mentioning Korea’s thorny relations with Japan. The peninsula nation is also technically still at war with North Korea since the 1950-53 Korean War ended with an armistice, not a peace treaty.

To hear more about the U.A.E.-Korea cooperation on the renewable energy front, on battling on the pandemic and on peace and security in the Middle East and the Korean Peninsula, the Korea Joongang Daily recently sat down with Ambassador Al Nuaimi and Rep. Lee. 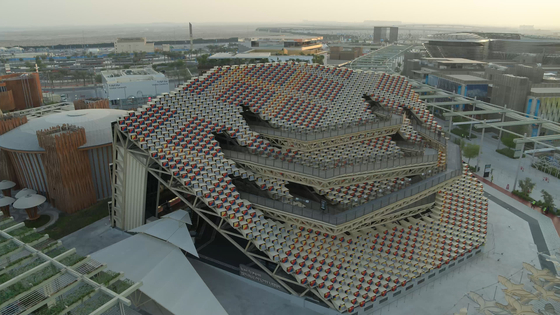 The Korea Pavilion at the Dubai Expo which launched on Friday. The pavilion is the fifth largest at the Expo, built into four levels, to showcase its ideas on future mobility. The expo, themed “Connecting Minds, Creating the Future,” is the first expo held in the Middle East, and will be open through March 31, 2022. [KOTRA]


The U.A.E. was the first nation in the Middle East to establish a strategic partnership with Korea, in 2009. In 2018, the relationship was elevated to a special strategic partnership. What does that new label mean for bilateral ties?
Abdulla Saif Al Nuaimi: The upgrade of relations to the special strategic partnership came in recognition of the expansion and diversification of bilateral cooperation to include new areas. For that, the two sides have established a number of specialized mechanisms to deal with each area. These include the Special Strategic Dialogue, the 2+2 meeting, the High-level Consultations on Nuclear Cooperation, the Joint Economic Committee meetings, and the Joint Consular Committee meetings. In addition, a number of agreements and memorandums of understanding [MOUs] have been reached to regulate bilateral exchange, including agreements on the avoidance of double taxation, investment promotion, civil aviation services, cultural cooperation and more.

Despite the pandemic, there were in-person meetings between the foreign ministers last year, and a number of Korean lawmakers, with the National Assembly speaker, visited Abu Dhabi this February. From a parliamentarian’s perspective, what key areas of cooperation between the two countries should be considered going forward?
Lee Myoung-su: I see many opportunities to expand the cooperation in the health and medical fields to combat the global spread of Covid-19. The U.A.E.'s medical response system has been strengthened due to the MERS outbreak in the Middle East in the past, and it is known that the U.A.E. has the highest vaccination rate per capita in the world. Korea and the U.A.E. are already cooperating on running hospitals such as the Sheikh Khalifa Specialty Hospital. But going forward, it will be very important for the two countries to have established a system of cooperation on the pandemic, so that when another crisis hits, the two countries know exactly what courses of actions to take together, on what grounds and rules.
Al Nuaimi: If I may add to that, one regulation that the two countries could work on together in regards to the pandemic would be the vaccine certification system. Currently, travelers from Korea to the U.A.E. have to quarantine when they return to Korea, even if they are vaccinated. The Covid-19 situation in the U.A.E. is well-regulated with strong distancing, tracing and testing measures, and we are ready to host in person the Dubai Expo from Oct. 1.

The demographic make-up of the U.A.E. is unique, given it has some 10 percent of its population as U.A.E. citizens and the rest consisting of foreign workers, including around 9,000 Koreans. How has the U.A.E. government communicated with its expat communities regarding the rules and regulations on social distancing?
Al Nuaimi: To ensure a healthy rule of law system is maintained even in the midst of a pandemic, inclusive laws and regulations must be formulated. They should also be communicated to the public in a transparent manner. When the public believes that every precautionary measure taken during the pandemic is transparent and in the public’s interest, rule of law will be maintained.
To communicate with its expat population for this purpose, the U.A.E. government is holding awareness campaigns in different languages, specialized hotlines, training courses and workshops. The U.A.E. believes that the spreading of knowledge about labor laws will help establish harmonious relationships between workers and employers and encourage productivity.

Tell us about where the U.A.E. is headed in its future energy policies, and where the Korea-U.A.E. cooperation on Barakah sits in that context.
Al Nuaimi: The U.A.E. government envisions using nuclear power as the main source for generating non-hydrocarbon-based electricity in line with internationally recognized safety standards and regulatory practices. The construction of the Barakah Nuclear Power Plant has been part of the U.A.E.'s strategic plans to diversify its energy mix, lower its carbon emissions, and free up gas used for power generation for export and other uses. The construction of additional peaceful nuclear reactors in the U.A.E. in the future depends on the country's energy strategy. The U.A.E. plans to generate 50 percent of its energy mix from clean and renewable energy, including nuclear power, by 2050 and is undertaking various projects to reach its goal. 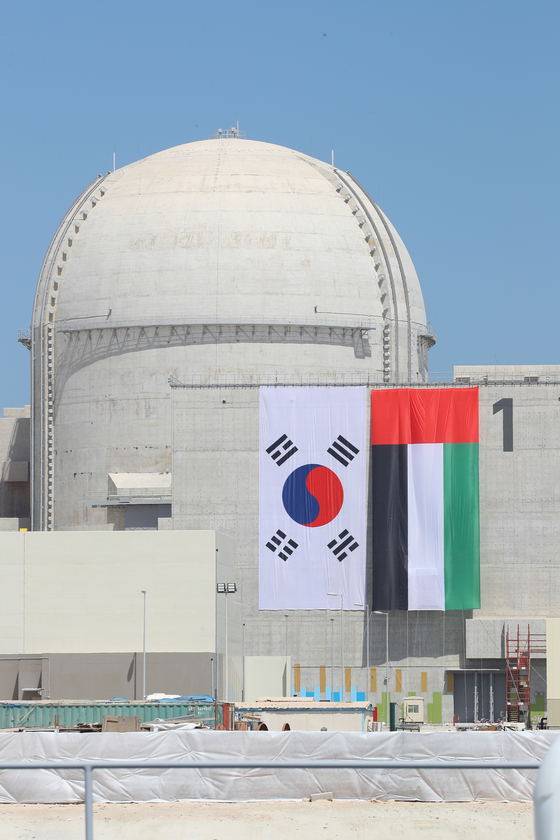 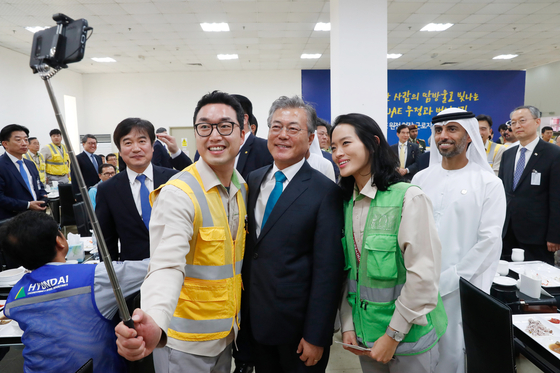 President Moon Jae-in meeting with the Korean workers at the site of the Barakah plant on March 26, 2018. [JOINT PRESS CORPS]

Last year, the U.A.E. became the third Arab state to establish ties with Israel, following Egypt and Jordan. Do you think that the U.A.E.-Israeli experience paves a way for other nations in similar situations to find ways to cooperate despite their differences?
Al Nuaimi: The U.A.E. signed the Abraham Accords with Israel and the United States in September 2020. It also signed the Treaty of Peace with Israel. The Treaty entitles the establishment of peace, diplomatic relations, and full normalization of bilateral ties between the U.A.E. and Israel. It also calls for enhancing bilateral cooperation in the areas of trade, finance, investment, civil aviation, science, innovation, health care and tourism, among others. The U.A.E.'s decision to sign the two documents is in line with the country's policy orientation toward tolerance and peaceful co-existence with other nations and cultures. The U.A.E. believes that these agreements are considered a first significant step toward an era of security and prosperity in the region and beyond. The U.A.E.'s historic decision to establish diplomatic ties with Israel has inspired and encouraged other countries in the region to follow suit.

What lessons do you think Korea can draw from the U.A.E. diplomacy last year and the establishment of ties with Israel?
Lee: The news of the establishment of diplomatic ties between the two countries was unusual and surprising. The fact that the two countries, which historically did not get along well, established partnership, made me think a lot about the relationship between Korea and Japan. Currently, Korea-Japan relations are facing a number of difficult issues, such as the court rulings on forced laborers, the issue of comfort women victims, the discharge of contaminated water from the Fukushima nuclear power plant and export control measures. Taking after the U.A.E.-Israel example, whereby the two countries thought foremost about the well-being of the peoples of both nations, I think that should also be the top priority, to examine what is in the best interest for the people of both Korea and Japan. And the same can be applied to the inter-Korean relations.


What is your next step, as head of the Korea-U.A.E. parliamentary association?
Lee: I intend to visit the Dubai Expo with a delegation early next year, if the Covid-19 situation then allows for such a visit. People-to-people interactions should be encouraged wherever possible. I don’t think it was by coincidence that the two countries’ ties have deepened over the years, and I look forward to developing them further in my conversations with fellow policymakers in the U.A.E. 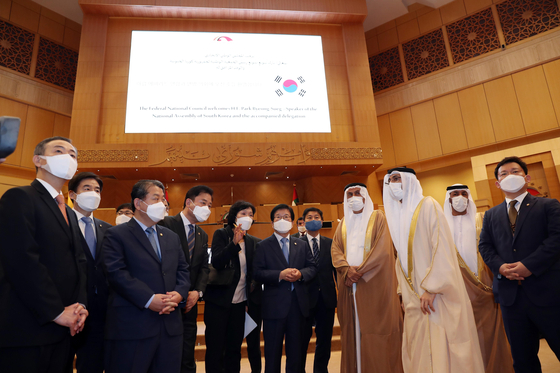 National Assembly Speaker Park Byeong-seug, center, with Speaker of the Federal National Council Saqr Ghobash Al Marri, third from right, at the FNC in the U.A.E. on Feb. 11, during Park’s visit. [YONHAP]

Having lived in Korea for the past four and a half years, what values did you think the two nations and peoples share?
Al Nuaimi: During my tenure as U.A.E. Ambassador to the Republic of Korea I have noticed that the people of the two countries share similar cultural values in terms of respect for parents and elderly, assistance of those in need, friendliness with others and generosity, to mention a few.
To enhance people-to-people exchange and cultural understanding between the two sides, an MOU was signed by the two countries on the Year of Cultural Dialogue 2020 on the occasion of the bilateral celebration of the 40th anniversary of diplomatic relations. Due to the impact of the Covid-19 pandemic, the event has been extended to the end of 2021. A number of activities and programs have been implemented as part of the Year of Cultural Dialogue, including Hallyu and K-pop. 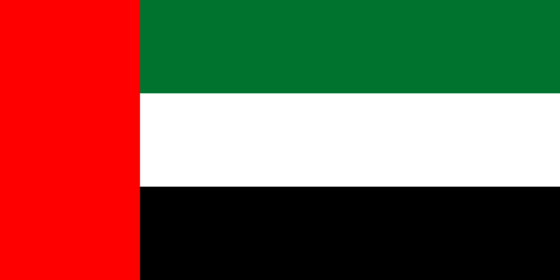 The U.A.E. and Korea established ties in 1980, which was elevated to a strategic partnership in 2009 and then a special strategic partnership in 2018. The two nations are close partners on traditional and new forms of energy, as the U.A.E. is Korea's fifth largest trading partner for crude oil and LPG and the first country to which Korea exported its nuclear energy technology. The two hold regular vice-ministerial dialogues on defense and foreign affairs and high-level consultations on nuclear cooperation.