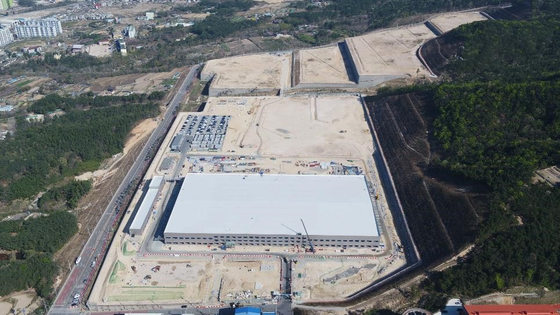 The construction of Hyundai Mobis' parts production plant in Ulsan. Hyundai Mobis last year became the first conglomerate to reshore since the government related laws in supporting such companies went into effect in late 2013. [HYUNDAI MOBIS]


A total of 21 companies have decided to close plants overseas and reopen them in Korea, a process known as reshoring. That exceeds the 16 companies that reshored full-year 2019.

The moves were due to the country’s success in containing the coronavirus and support provided to companies shifting capacity, the government said.

According to the Ministry of Trade, Energy and Industry on Monday, this year more mid- to large-size companies, particularly auto makers and chemical manufacturers, have moved factories back to the home market.

Six mid- to large-size companies have moved back this year, from four full-year 2019.

The government expects the numbers to continue to rise and has expanded support for reshoring with measures that goes into effect Tuesday. It announced in July that it would expand the access to tax cuts and subsidies for reshoring companies.

Previously, the conditions were limited to manufacturers. Now government support is open to knowledge-based service providers well as well information and telecommunication companies and those that open research and development centers.

The government has extended the period in which companies planning for reshoring can apply from one year to two years. For those expanding their facilities or creating new facilities, they will be eligible for the government support for five years rather than the previous three years.

Tax cuts were previously available for a maximum of seven years — 100 percent tax cuts for the first five years and 50 percent cuts for two additional years — when constructing new facilities in the country.

One of the conditions for the tax cuts was the company downsizing its overseas operation for more than 50 percent. Those conditions have been changed.

Companies will be eligible for the tax cut even if just expanding facilities in Korea, and they will no longer have to cut capacity by 50 percent overseas.

The tax cut will be granted according to how much the company reduces overseas capacity.

Subsidies for high-tech companies reshoring to areas outside of the greater Seoul area will be tripled, from a maximum of 10 billion won ($9 million) to 30 billion won.

A 20-employee minimum has been abolished. Instead, the subsidy will be provided according to the number of people that the company hires as well as the size of the investment.

In the greater Seoul area, the subsidy will be capped at 15 billion won. The government is also offering 900 million won for the upgrading of plants to smart factories incorporating robotic technologies.

Subsidies for employment have been expanded. Previously the companies reshoring could apply for 7.2 million won of employment subsidies for a maximum two years per employee within three years of relocating back to Korea. That application period has been expanded to five years.

The outbreak of the novel coronavirus exposed the vulnerability of the global supply chain through the lockdown earlier this year in China causing production delays.

The Moon Jae-in administration has also been strongly encouraging Korean companies to relocate to Korea since the Japanese government tightened its exports of key materials last year.