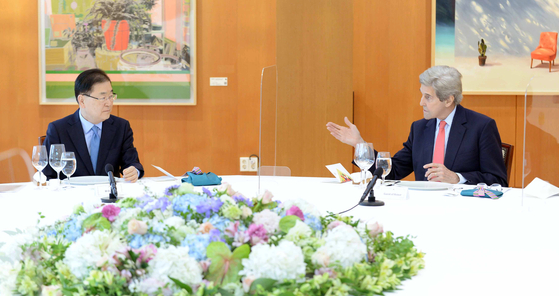 
Washington does not think it is “appropriate” to intervene in Japan’s plans to release contaminated water from its crippled Fukushima nuclear power plant, the U.S. climate envoy said Sunday in Seoul.

“The U.S. is confident that the government of Japan has had full consultation with the IAEA [International Atomic Energy Agency],” said U.S. Special Presidential Envoy for Climate John Kerry in a roundtable meeting with media in Seoul Sunday. “What is key is Japan's continued coordination with the IAEA as it monitors the process.”

When asked if Washington will play a role in the process, Kerry said, “We don’t think it is appropriate for the U.S. to jump in to the process that's already underway and where there are very clear rules and expectations.”

Kerry was on a two-day visit to Korea since Saturday after making a four-day visit to Shanghai ahead of the virtual Leaders Summit on Climate to be hosted by U.S. President Joe Biden on Thursday and Friday.

A massive earthquake and tsunami struck Japan on March 11, 2011, causing a meltdown at the Fukushima plant, operated by Tokyo Electric Power Company (Tepco).

Tokyo’s announcement last Tuesday to gradually release over 1.25 million tons of wastewater stored in more than 1,000 tanks at the Fukushima plant into the Pacific Ocean starting 2023 has been protested by the Japanese fishing industry, environmental groups and neighboring countries.

Kerry however said, “I know that Japan has weighed all the options” and has been “very transparent in the process.”

Chung conveyed to Kerry the concerns of the Korean people over Japan’s plans to release the contaminated water from Fukushima and asked for Washington to play a role in ensuring Tokyo offers information in a “transparent and swift manner” to the international community.

On climate action, Chung and Kerry recognized the need for Korea and the United States to “take a leading role in bringing together international solidarity and cooperation to achieve the goal of carbon neutrality by 2050,” and agreed to continue strengthening communication and cooperation in climate response, Seoul’s Ministry of Foreign Affairs said in a statement.

They stressed the “mutual synergy” between President Biden’s Leaders Summit on Climate this week and the Partnering for Green Growth and the Global Goals 2030 (P4G) Seoul Summit on May 30 and 31 hosted by Korea to help ensure the success of the 26th session of the Conference of the Parties to the United Nations Framework Convention on Climate Change, or COP26 summit, to be held in November in Glasgow.

Ahead of his meeting with Chung at the foreign minister's residence, Kerry wrote in the visitors' log, "Thank you very much for Korea's leadership on the climate crisis."

Biden invited leaders of 40 countries to take part in the virtual summit this week, which coincides with Earth Day. Korean President Moon Jae-in will also be attending.

The summit is expected to be an opportunity for the United States to outline its goals for reductions of carbon emissions by 2030 in keeping with the Paris Agreement on climate change which took effect in 2016. 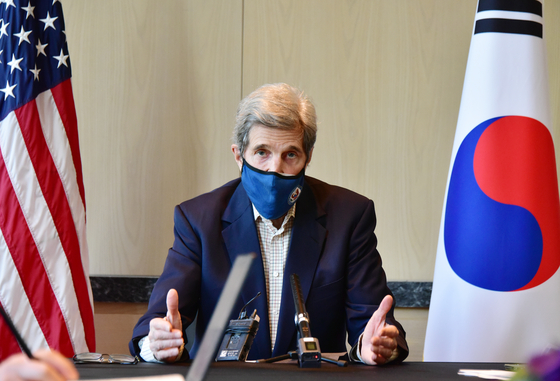 U.S. Special Presidential Envoy for Climate John Kerry speaks to reporters during a roundtable meeting with press at a hotel in central Seoul Sunday. [U.S. EMBASSY]

Kerry told reporters Sunday he had a “terrific dinner” with Chung and said it is “wonderful to see Korea taking the lead, and caring so much about regional and global concerns.”

He stressed the importance of a quicker transition to the new energy, the jobs it promises, and the opportunities to move towards more sustainable practices.

“It is the biggest market the world has ever known,” said Kerry. “We are looking at the greatest economic transition since the industrial revolution.”

He added, “This is not something any one entity or one country can resolve. It requires major multilateral effort, and every aspect of society needs to join in.”

Kerry and the China Special Envoy for Climate Change Xie Zhenhua met in Shanghai on Thursday and Friday and released a joint statement on the “seriousness and urgency” of the global climate crisis. China and the United States are the biggest carbon emitters in the world.