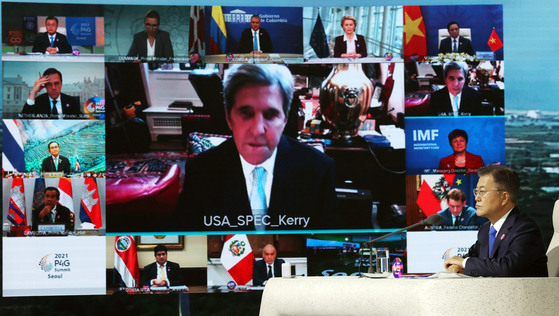 Korean President Moon Jae-in listens to John Kerry, the U.S. special presidential envoy for climate, as he presides over the virtual Leaders’ Dialogue during the 2021 P4G Seoul Summit Monday evening at the Dongdaemun Design Plaza (DDP) in central Seoul. [YONHAP]


World leaders at the P4G Seoul Summit stressed that the path to carbon neutrality by 2050 is not only an environmental solution but can create great economic opportunity, while warning that decisive climate action has to take place in the next decade.

“The government alone cannot and will not solve this crisis, and this is where the P4G and public-private partnerships to build sustainable and resilient communities are going to be critical,” John Kerry, the U.S. special presidential envoy for climate, said as he joined virtually in the Leaders’ Dialogue presided by Korean President Moon Jae-in in Seoul Monday night.

P4G, or Partnering for Green Growth and the Global Goals 2030, is a global initiative that seeks climate action through innovative public-private partnerships and aims to deliver on the UN Sustainable Development Goals (SDGs) and the Paris Agreement on climate change adopted in 2015.

“The good news is that getting to net zero by 2050 is not a hardship — it’s an incredible economic opportunity,” Kerry told the world leaders. “The energy market, the transition market, represents the largest market the world has ever known, and this will be the greatest transformation since the industrial revolution. Entire new industries will emerge, industries with multi-trillion dollar markets.”

However, Kerry warned that the “harsh reality is we are not on track” to accomplish net-zero emissions by 2050, stressing that the upcoming decade is a critical window of time for governments to “step up our ambitions across the board” on their 2030 carbon emissions targets.

He noted that countries that comprise more than 55 percent of the global GDP are now fully committed to the target of limiting global warming to 1.5 degrees Celsius (2.7 degrees Fahrenheit), but that many more need to join in.

“While we absolutely must invest in innovation, we have to act now with the technologies we have now because we cannot just bet on a future miracle,” said Kerry, noting that 2020 to 2030 is the “decisive decade.”

He continued, “If we fail to make sufficient progress by 2030, it will become scientifically, physically — barring a miracle — impossible to be able to make the reductions to get us to net zero by 2050. On the other hand, if we join together and grab the opportunity right now, we will create millions of jobs, improve the health and welfare of our citizens, provide greater security for nations, and bring the world together in the greatest common enterprise of all time.”

A similar message was reflected by President Moon in his opening remarks at the session discussing "Carbon Neutrality through Inclusive Green Recovery."

“Recovering from the pandemic, it’s the right time to rethink our societies and economies,” said Ursula von der Leyen, president of the European Commission. “We have a chance to rebuild for a greener and healthier future, and that is what the European Green Deal is about — our new growth and innovation strategy.”

She called the 2020s the “make-or-break decade,” noting that Europe has committed to reducing emissions by at least 55 percent by 2030.

Europe also aims to be the first climate-neutral continent by 2050.

She called on governmento “speed up the coverage of carbon emissions with an appropriate price,” noting that “a predictable, steadily rising carbon price drives businesses toward the right choice of low-carbon intensity activities.”

She continued, “In Denmark, green transition does not happen at the expense of society. No, it drives our society forward, create jobs for thousands of people.”

Denmark was the host of the inaugural P4G Summit in October 2018.

Colombia will be the third host country of the P4G Summit in 2023.

In the Seoul Declaration adopted at the end of the summit, the leaders recognized that the “climate crisis as an urgent global threat whose impacts reach beyond the environment agenda to include economic, social, security and human rights-related challenges.”

They pledged to “strive to pursue green recovery as an inclusive process that reflects a just transition, taking into account different national circumstances as well as socially and environmentally vulnerable communities.”

Stressing the importance of multilateralism in tackling climate change, Colombian President Iván Duque Márquez said in closing remarks, “We know that the leadership that has been shared to the world by Korea and by President Moon with a Korean New Deal is also an inspiring set of policies that we must all embrace.”

A total of 67 leaders, including 46 top-level officials and 21 representatives of international organizations, attended the two-day summit held virtually over Sunday and Monday.

The P4G Summit had 15 sessions including five thematic sessions on water, energy, food and agriculture, cities and the "circular economy," or a system that does not dispose of consumed resources but puts them back into the economy. Korea also hosted 10 breakout sessions in the week ahead of the climate conference.

“The P4G summit is significant in that Korea played an important role as a bridge between climate leaders and developing countries with different circumstances and positions, leading the international climate response,” said Chung. “A key example is the Seoul Declaration adopted at this summit which shows concerted commitment to climate action. Through the declaration, a consensus was formed that green recovery is a means for overcoming the climate crisis and economic reconstruction following Covid-19.”

Climate change is one of the areas that the United States and China can cooperate in amid the Sino-U.S. rivalry, and Chung told reporters, “The two countries have contributed greatly to the international community's unified will to respond to climate change by both participating in the P4G Summit” and the Seoul Declaration, even though they are not P4G members.

Chung added, “In particular, the Seoul Declaration recommends lowering dependence on coal power generation, and it is meaningful that China took part in such a declaration.”

The declaration encourages “approaches to phase out existing coal and stop public financing for overseas construction of coal-fired power plants.”

Chung added that Seoul views that Beijing and Washington “have contributed greatly to the international community's unified will to respond to climate change by participating in the P4G Summit together.”

Environment Minister Han said that the summit “emphasized the need for technology sharing and support for developing countries to achieve green growth and carbon neutrality” and urged the Korean government and the international community to expand cooperative projects in developing countries.

Han said that as an intermediate goal of the 2050 carbon-neutral implementation, Korea plans to further raise the national greenhouse gas reduction target for 2030 and will announce it at the 26th Conference of the Parties on Climate Change, or COP26, in November.

Korea, she added, will realize carbon neutrality through inclusive green recovery at the upcoming Group of 7, or G7, summit in London in June, the UN General Assembly in September, the G-20 summit in October, and the COP26 in Glasgow.

Han said that at the summit, Korea also announced intentions to host the 28th Conference of the Parties on Climate Change (COP28), the largest international conference in the field of climate and environment.