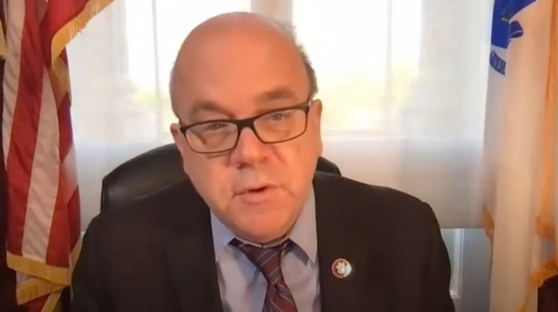 
A group of U.S. lawmakers urged the National Assembly to revisit a new law that prohibits sending leaflets into North Korea in a congressional hearing, arguing that it is undemocratic and violates the South Korean constitution.

The hearing was held on Thursday by the Tom Lantos Human Rights Commission, a bipartisan House of Representatives caucus, inviting witnesses to speak on the anti-leaflet law passed by the National Assembly last December. The amendment to the Development of Inter-Korean Relations Act, which went into effect last month, is seen by critics and rights organizations as an infringement on freedom of expression as it blocks the dissemination of information from the outside world into North Korea.

Rep. James McGovern, a Democrat of Massachusetts, a co-chair of the commission, said he hopes the National Assembly will amend the law, as a democracy, unlike an authoritarian government, allows for "redress."

"In democracies, people can have channels they can use to change policies and demand accountability," said McGovern. "Personally, I hope the National Assembly decides to fix the bill – again, that's the advantage of living in a democracy. There's always a chance for a re-do."

The anti-leaflet law, meant to protect people living near the demilitarized zone, stipulates a prison sentence of up to three years, or a fine of up to 30 million won ($27,000), for distributing items like leaflets, printouts, money or electronic storage devices to North Korea over the inter-Korean border.

Rep. Christopher Smith, a Republican of New Jersey and a co-chair of the commission, in his opening remarks labeled the South's anti-leaflet law the "anti-Bible and BTS balloon bill," noting that the balloons carry religious information and items related to Korean pop culture such as K-pop band BTS across the border.

He said that he believes that the new law, currently under review by the Korean Constitutional Court, "unduly infringes upon freedom of expression under both the Korean constitution and the International Covenant on Civil and Political Rights."

Smith added that the supermajority of President Moon Jae-in's Democratic Party (DP) in the National Assembly has "led to a gross overstepping of authority" and criticized the "harassment" of defector groups that send balloons to the North.

He continued, "But perhaps even more significant than the bending of the knee toward North Korea are efforts to equidistance Korea from the United States and toward China," as Washington has pressured Beijing over rights issues and its growing assertiveness in the Asia-Pacific region.

Smith added, "Korea must resume its commitment to civil and political rights in particular, and human rights in general."

Rep. Young Kim, a California Republican, likewise said that Seoul and Washington as "democratic allies and close friends" must work together on the challenges and threats posed by North Korea and other authoritarian governments in the Indo-Pacific region, noting that anything less "will undermine the idea that democratic ideals are worth preserving."

A panel of six witnesses, including human rights activist Suzanne Scholte, chair of the North Korea Freedom Coalition, testified during the virtual hearing.

The U.S. lawmakers noted that the restrictions are not new to the current administration, which has favored inter-Korean engagement, and that conservative governments have prohibited the dissemination of leaflets during delicate moments in inter-Korean history and have also been accused of stifling of freedom of expression.

The hearing comes ahead of a summit between President Moon Jae-in and Biden in Washington next month.

McGovern said during the hearing that he expects such a meeting "will be an opportunity" for the two leaders "to discuss ways to reinforce the alliance and review how best to advance several shared goals, including improving human rights in North Korea, reducing the risk of conflict and nuclear war, and ensuring security and stability on the peninsula."

The U.S. congressional hearing was met with mixed reactions from South Korean lawmakers.

Ruling Democratic Party (DP) Rep. Youn Kun-young, member of the parliamentary Foreign Affairs and Unification Committee, wrote in a Facebook post Friday, "I really can't understand whether the legislation of the National Assembly of a sovereign state on the safety of its people should be subject to a hearing by another country."

He added, "It is also questionable whether the contents and process of the hearing proceeded fairly," pointing out that four out of six panelists were longtime critics of the ban on leaflets or participants in their dissemination.

Rep. Youn stressed that that anti-leaflet law "is a measure for the safety of the 1.2 million residents of the border region in the Republic of Korea."

Hwang Kyu-hwan, a spokesman of the main opposition People Power Party (PPP), in a statement Saturday criticized Youn's remarks and said, "Rep. Youn, as well as the DP, does not admit to mistakes and always points fingers at others."

"Isn't it common sense to ask why South Korea became a target of criticism in a hearing by a foreign country?" he added.