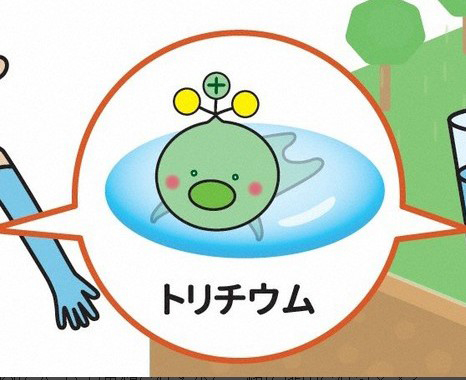 A cute character created by Japan’s Reconstruction Agency to promote the safety of tritium contained in the contaminated water from the Fukushima nuclear reactor. [YONHAP]


Hydrogen is the most common element in the universe. It makes up 75 percent of the entire universe. There are three major types of hydrogen isotopes. Protium is the ordinary type with no neutron and one positron in the nucleus. Deuterium, or heavy hydrogen, has a proton and neutron in the nucleus. Tritium’s nucleus contains one proton and two neutrons. Protium is dominant in nature, making up 99.985 percent of hydrogen. Deuterium and tritium make only 0.015 percent.

Tritium is an expensive material that is hard to find. According to the Korea Hydro and Nuclear Power Co., one gram of tritium is priced at up to 35 million won ($31,320). One gram of gold was traded at 62,950 won as of April 13, making tritium 524 times more expensive than gold.

Tritium is so expensive because it is hard to separate. The tritium removal facility installed in the Wolseong nuclear plant in Korea uses cryogenic distillation, a technology that separates hydrogen isotopes by using the difference in boiling points. By cooling to minus 250 degrees Centigrade (minus 418 degrees Fahrenheit) and distilling, relatively light deuterium becomes gas and heavier tritium is separated and enriched as liquid. To maintain the liquefied temperatures for deuterium and tritium, liquefied hydrogen or low-temperature helium is used as a cryogenic refrigerant. Even through this process, it is impossible to completely separate tritium.

The Japanese government plans to release the expensive tritium because of the astronomical separation cost. The Fukushima 1 nuclear plant’s reservoir tank contains 1.25 million tons of polluted water. Japan made a plan to release polluted water early on. The pro-government media in Japan supporting the decision refer to the polluted water as “processed water.”

It is no coincidence that Japan announced the decision to discharge the polluted water shortly before the U.S.-Japan summit on April 16. The International Atomic Energy Agency led by a Japanese secretary general over the past ten years sided with the Japanese government. But economic efficiency cannot come before environmental concerns and the safety of the people in neighboring countries.

The Korean government is seeking ways to bring the case to the International Tribunal for the Law of the Sea, but it will not be effective if the Japanese government ignores the ruling. The time has come for Korea to show the power of pressing play.