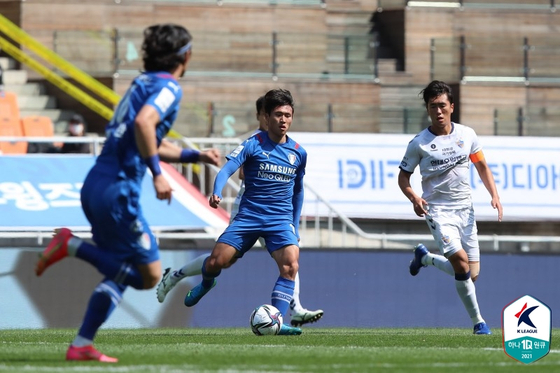 Nineteen-year-old Jeong Sang-Bin of the Suwon Bluewings, center, dribbles the ball in a game against Ulsan Hyundai FC at Suwon World Cup Stadium in Suwon, Gyeonggi on Sunday. [YONHAP]


Jeonbuk Hyundai Motors and Ulsan Hyundai FC held on to the first and second spots in the K league 1 table for another week.

Jeonbuk added another win, extending their streak to ten games without a single loss after beating Seongnam FC 1-0 on Sunday at Jeonju World Cup Stadium in Jeonju, North Jeolla.

Despite the loss, Seongnam’s defense was fierce and the first shot of the game didn't come until 31 minutes into the first half.

Throughout the game, Jeonbuk were able to make only seven shots and Seongnam five — not many compared to Jeonbuk’s 15.5 and Seongnam’s 9.2 average shots per game last season.

Although they put up a good fight against the North Jeolla side, Seongnam were unable to overcome the one goal scored by Jeonbuk’s Han Kyo-won in the last 15 minutes of the game.

Ulsan lost 3-0 to the Suwon Samung Bluewings at Suwon World Cup Stadium on Sunday, but still managed to hold on to the No. 2 spot.

The win may signal a turnaround for the Bluewings, who jumped from sixth to third with a goal difference boost.

The Bluewings were aggressive from the start. Striker Kim Gun-hee opened the scoring just 13 minutes into the game, with 20-year-old Kang Hyun-muk and 19-year-old Jeong Sang-bin adding two more in the second half.

Kang was able to score his first goal a minute into the start of the second half, picking up a block from Ulsan goalkeeper Jo Hyeon-woo and sending it back into the right corner of the net, completely fooling the national team goalie.

Just 23 minutes later, Kang and Jeong were back in front of the goal.

Kang fired a cross to Jeong with his left foot that flew between Ulsan’s veteran center backs Dave Bulthuis and Kim Ki-hee. Jeong caught the ball on his head, slotting it home.

Since the 2012 London Olympics, the K league has established the "U-22 rule," recognizing the importance of letting U-22 players acquire experience on the field.

For this season, K League 1 clubs are allowed to make up to five substitutions in a match if they have at least two players under 22 years old on the squad and at least one in the starting 11. If only one of the younger players starts, the team has to use one of those five substitutions to bring on a U-22 player, or they'll be knocked down to three substitutions.

Since the start of the season, a total of 133 goals have been scored in the K league, 21 of which were scored by these young players.

It was a good weekend for the people of Suwon, as Suwon FC also brought home their first win in a month against Gangwon FC, winning 2-1 at Suwon Sports Complex. Suwon rose one spot to 11th, while Gangwon was pushed down to eighth.


FC Seoul is struggling with a hard season, losing yet again to Daegu FC 1-0 at Seoul World Cup Stadium in western Seoul on Saturday.

Despite having started out the season at second on the table, this is their fourth loss and the Seoul team now sits at seventh.

On Saturday, Jeju United took away a 3-0 win against Incheon United at Incheon Football Stadium and the Pohang Steelers won 1-0 against Gwangju FC at Gwangju Football Stadium. Jeju is now fourth, the Steelers sixth, Gwangju ninth and Incheon stays at 12th on the K league 1 table.