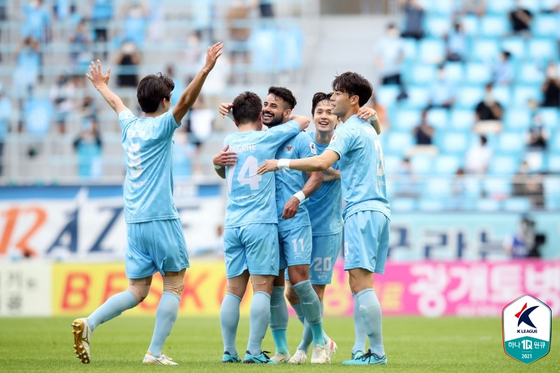 Daegu FC celebrates their win against Gangwon FC on Sunday at the DGB Daegu Bank Park in Daegu. [K League]

Ulsan midfielder Lee Dong-jun opened the scoring in the 68th minute. Jeju was quick to come back with an equalizer in the 83rd as Joo Min-kyu’s penalty found the back of the net.

Ulsan got a penalty of their own just seven minutes later, with Kim Ji-hyeon succeeding from the spot. This is Kim’s second consecutive goal, having scored in the FA Cup game against Gyeongnam FC on Wednesday.

Ulsan has now topped the table for two weeks in a row, while Jeju remains at sixth.

Ulsan is six points ahead of Jeonbuk who took the K league 1 title for the last four years.

The once mighty Jeonbuk have now gone seven games without a win. Jeonbuk tied 1-1 against Incheon United on Saturday at Incheon Football Stadium in Incheon.

Incheon's Goo Bon-cheol opened the scoring in the 42nd minute, with Jeonbuk narrowly avoiding another loss with a last-minute Takahiro Kunimoto equalizer.

Unable to recover from their recent three straight losses, Jeonbuk falls down to fourth and Incheon stays at eighth on the K league 1 table.

Both Suwon teams continue their undefeated run, as Suwon FC beat Seongnam FC 3-2 on Saturday at Tancheon Sports Complex and the Bluewings took a big 3-0 win against FC Seoul on the same day at Seoul World Cup Stadium. Suwon FC stays at seventh as the Bluewings jumped up to runner-up on the K league 1 table.

Daegu trail right behind the Bluewings by just one point as they continue a dominant 10-game undefeated streak.

Daegu won 1-0 against Gangwon FC on Sunday at home, as Kim Soo-beom of Gangwon scored an own goal in the 43rd minute. Unable to repair the damage, the game finished at 1-0 and Gangwon stays at ninth on the table.

The Pohang Steelers won 1-0 against Gwangju FC at Pohang Steel Yard Stadium on Sunday and jumps up to fifth on the table, while Gwangju stays at 12th.

The five K League 1 fixtures that were postponed in early May due to a Covid-19 outbreak are now scheduled to take place throughout the international break in June.

Two rescheduled games will be played this Sunday: Seongnam vs. Jeonbuk and Daegu vs. Seoul.