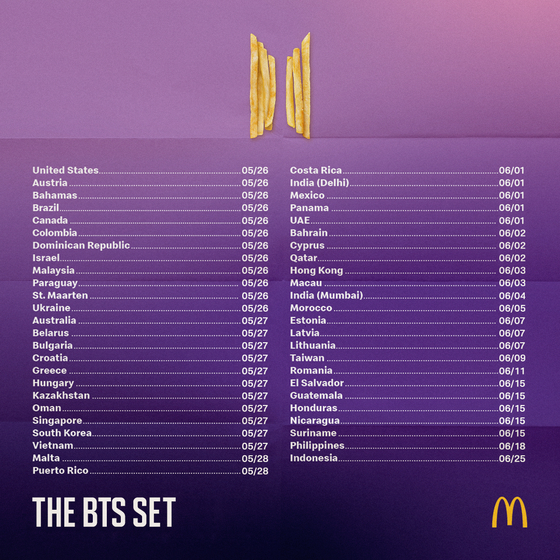 BTS didn’t get a Grammy, but it got its own Happy Meal.

McDonald’s is rolling out a special set for the seven-member band, which includes 10 Chicken McNuggets –- more than 1 per band member –- a Coke, fries and two dipping sauces.

The dipping sauces, sweet chili and Cajun, are Korean developed.

BTS has associated itself with a wide variety of brands, including Coca-cola, Hyundai Motor, Kloud Beer, SK Telecom and the Bodyfriend massage chair.

McDonald’s says that the set is made up of items BTS members like to eat.

It will roll out in the United States, Brazil and Canada on May 26, Korea, Australia and Greece on May 27 and Malta and Puerto Rico on the following day. Indonesia will be the last country where the BTS Set lands, on June 25.

“We are so excited to be able to introduce the BTS Set to Korean customers starting next month,” said a spokesperson for McDonald’s Korea.

The meal will be available in Korea through June 30.

No price has been disclosed.

“Fake Love,” “Dynamite” and “Map of the Soul” are some of the well-known songs of BTS.