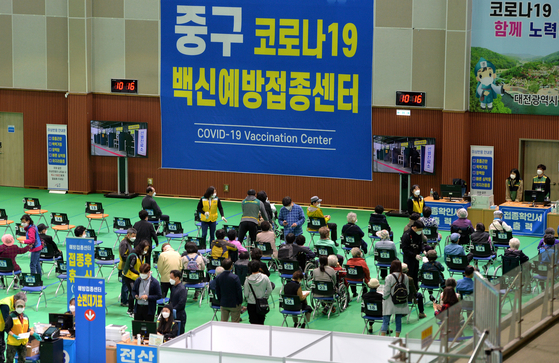 Senior citizens wait for any possible adverse reactions after receiving Pfizer shots at a Covid-19 vaccination center in Jung District in Daejeon on Tuesday. A cluster of infections is continuing in the city. [KIM SEONG-TAE]

"Vaccine cooperation between Korea and the United States is taking place in a multilayered manner through various levels," Chung added.

Translated directly from Korean, the deal, or “vaccine swap,” is based off of the currency swaps between Korea and the United States in 2008 and 2020, in which Korea deposited Korean won in the U.S. central bank, borrowed the corresponding amount in dollars and paid the amount back later.

The vaccine loan deal was first proposed by Rep. Park last December as a solution to the country’s vaccine shortage — Korea would receive emergency aid in the form of the vaccine from the U.S. and then pay the U.S. back later with vaccines produced on consignment in Korea.

Regarding the feasibility of vaccine cooperation with the United States without pressuring China, such as by participation in the Quadrilateral Dialogue, or Quad, the U.S.-led four-way security cooperation mechanism, Chung answered, “Cooperation in vaccine [procurement] should be considered a priority in the two countries' alliance relationship.”

Chung then said, “The conflict between the United States and China or Korea’s participation in the Quad has nothing to do with [vaccine cooperation] directly,” adding, “Even for the U.S. and the European Union, the vaccine issue decouples with political and diplomatic issues in principle.”

Chung also added that the government is considering dispatching a special envoy to procure Covid-19 vaccine supplies, but did not elaborate about the vaccine loan deal.

Health authorities took a step back from the foreign minister’s remarks, saying they have “nothing to explain yet.”

“There have been no advancements to inform the people of, as of yet,” said Sohn Young-rae, a senior health official of the Central Disaster and Safety Countermeasure Headquarters, during a Tuesday briefing.

“The government is trying its best to find various means [of vaccine procurement] with vaccine producers, and we will announce if there is any progress,” he said.

Health authorities reiterated that they have not changed the country’s vaccination campaign plans, adding that the country is aiming to inoculate 3 million people by the end of April.

"The goal is to complete the first round of vaccinations by the end of June for 12 million elderly, those in high-risk groups and essential workers," said Sohn.

"For the goal of inoculating 3 million people by the end of this month, we’re increasing the number of vaccination centers in each region and the rate of vaccination,” Sohn added.

"If the first round of vaccinations is made for 12 million people, it will be possible to continue afterwards in a somewhat relaxed response as severe cases and fatality rate will drop.”

Health officials added that they are in talks with multiple pharmaceutical companies to purchase more vaccines in addition to those for 79 million people already reserved.

“A number of officials, including the minister of health and welfare, have been in talks with vaccine producers to introduce the vaccines early and to obtain additional ones,” said Sohn.

“Currently, we have procured vaccines for 79 million people, and there isn’t a big problem in this year's total vaccine supply if they’re delivered as planned — so we are prioritizing trying to speed up the delivery of vaccines to Korea in the first half of the year."

Sohn added, "There are many variables such as the third 'booster' shot, so we are also reviewing and discussing making additions to next year's contract." 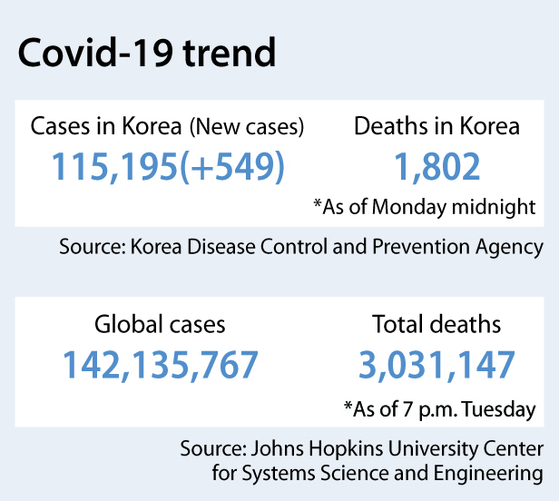 Korea reported 549 new coronavirus cases as of Monday midnight, including 529 local infections. The country’s cumulative caseload was raised to 115,195.