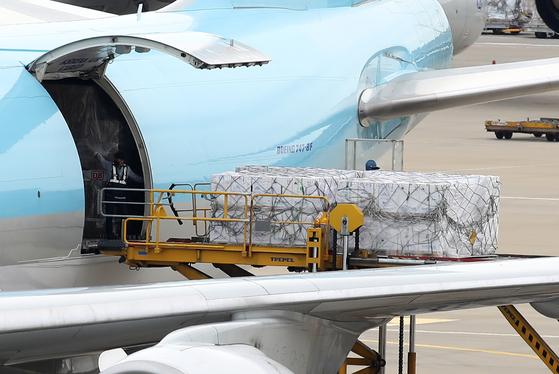 Boxes of Pfizer's Covid-19 vaccines are unloaded from an aircraft in the cargo terminal of Incheon International Airport on Wednesday. [YONHAP]


A total of 1.53 million Covid-19 vaccine doses from Romania are arriving in Korea starting Thursday.

The Central Disaster and Safety Countermeasure Headquarters (CDSCH) announced the shipment schedule of vaccines from Romania in a swap deal during a press briefing Wednesday.

“The two countries have been exchanging vaccines and medical supplies since Aug. 10 for mutual cooperation in quarantine amid a global shortage of vaccines,” Lee Ki-il, first control officer for the CDSCH said during Wednesday’s briefing.

“As a result, Korea purchased 1,053,000 doses of Pfizer vaccines from the Romanian government,” Lee said, “and Romania donated 450,000 Moderna shots [in exchange for] medical supplies provided by Korea through a donation.

“On the 60th anniversary of the two countries' diplomatic relations, the Romanian government thanked Korea for providing diagnostic kits in March last year in the early days of Covid-19,” said Lee.

The headquarters said that 1,053,000 doses of Pfizer vaccines and 450,000 Moderna shots will arrive at Incheon International Airport tomorrow and next Wednesday.

The Pfizer vaccines are Belgian-made, and expire on Sept. 30.

“There is no problem in administering them with a one-month deadline,” Lee said.

“Since fewer than a million vaccinations are currently being carried out per day, we believe the vaccines [sent from Romania] have long enough expiration dates, as they can be used within two to three days,” said Lee, citing expiring vaccines procured through a swap deal with Israel in July that were all used in time.

The Moderna vaccines were made by the Spanish pharmaceutical firm Rovi, and the expiration dates range from between Nov. 12 and Dec. 5.

Recently, however, cases of contamination arose in some Moderna vaccines manufactured by Rovi that were distributed in Japan.

Japan's Okinawa prefecture identified foreign substances in Moderna doses, adding safety worries about the vaccines coming to Korea, which were made in the same Spanish plant.

“It is true that the vaccines made by Rovi are coming in, but there is no such worry as they are from a different batch,” Lee said.

The vaccines coming from Romania will be used to vaccinate people aged 18 to 49.

Korea is ramping up vaccinations for that age group in a bid to give at least one dose of a Covid-19 vaccine to 36 million people, or 70 percent of the population, before the Chuseok autumn harvest holiday from Sept. 20.

In addition to Moderna shipment coming from Romania, the U.S. pharmaceutical company announced last month that it will send seven million doses of its vaccine by this Sunday.

Uncertainty over vaccine supplies still lingers, as health authorities earlier said the shipment dates weren’t documented in a contract but were sent through an email.

“We are continuing to discuss the detailed schedule with Moderna,” Lee said.

“We will inform in detail as soon as the vaccines arrive,” he said. “We’re expecting to receive enough doses.”

The government also explained that it is still discussing with Moderna vaccines bottled by Samsung Biologics locally can be made available in local clinics.

Samsung Biologics is set to start test packaging of Moderna's vaccine at its local factory as early as this week, although they are expected to be shipped overseas instead of being used here.

Meanwhile, Korea’s daily coronavirus cases shot up to over 2,000 again on Wednesday.

The country saw 2,025 new Covid-19 cases, including 1,992 local infections, raising the total caseload to 253,445, according to the Korea Disease Control and Prevention Agency (KDCA).

As of Tuesday midnight, 57 percent of the population had received their first shots of Covid-19 vaccines, with 30.7 percent being fully vaccinated.