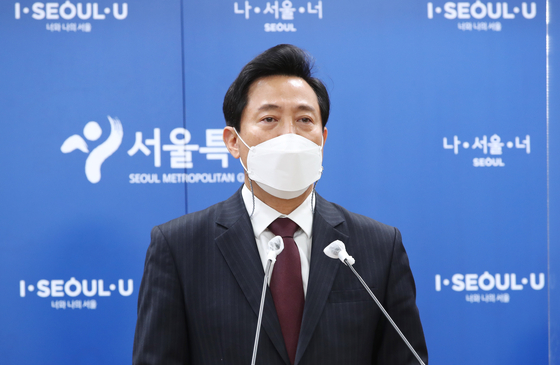 Seoul Mayor Oh Se-hoon announces a one-strike policy to combat sexual harassment and abuse in the city government at a press briefing on Tuesday at the City Hall. [NEWS1]

“I convey my deepfelt apology for the sexual harassment and abuse incident that took place during the mayorship of former mayor,” Oh said in a press briefing Tuesday. “The victim and her family have gone through an excruciating time over the past year. I am very sorry as current mayor of the city.”

Park’s former secretary filed a complaint with the police last July 8 claiming the mayor sexually harassed her for years and that her coworkers turned a blind eye.

Park found out about the former secretary’s intention to file a police complaint a few hours before from his special adviser on gender equality, according to prosecutors. Park went missing the next day and was found dead on July 10.

A police investigation was closed due to the death of the suspect. The victim requested an investigation by the National Human Rights Commission of Korea, which in January concluded that Park did sexually harass the former secretary.


The victim of Park's sexual harassment was described as an “alleged victim” by a number of female lawmakers last year, as if they doubted her claims. Democratic Party Reps. Nam In-soon, Ko Min-jung and Jin Sun-mee, were amongst those reported to have used the term, and have apologized.