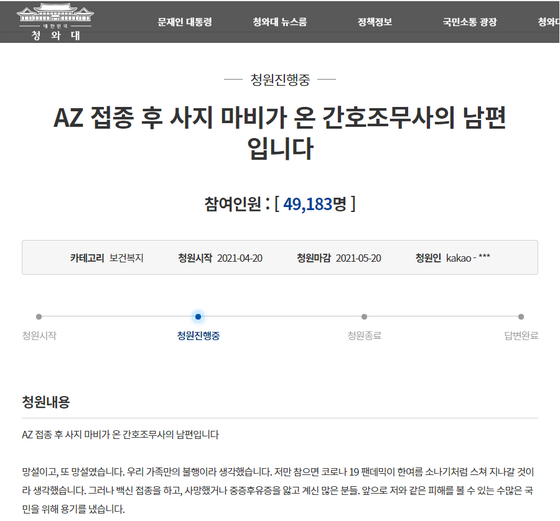 A Blue House petition was posted by the husband of the nursing assistant who was hospitalized with a serious neurological disorder after receiving the AstraZeneca shot, pleading the government to acknowledge the vaccination side effect as an industrial accident and criticizing the government’s long compensation period. [SCREEN CAPTURE]


President Moon Jae-in ordered health authorities review a support plan for the 45-year-old nursing assistant who was hospitalized with a serious neurological disorder after receiving the AstraZeneca shot, following an online plea from her husband.

“President Moon Jae-in delivered consolation to the nursing assistant [who suffered] from paralysis of four limbs after vaccination and to her family, and ordered the revision of supporting measures,” Blue House spokesperson Park Kyung-mee wrote in a briefing Wednesday.

“President Moon demanded careful attention so that measures would be carried out according to the government's support system, such as supporting medical expenses, although it will take time to identify the medical causality,” Park added.

President Moon’s remarks were made following a Blue House petition posted by the nursing assistant’s husband on Tuesday, pleading the government to acknowledge the vaccination side effect as an industrial accident and criticizing the government’s long compensation period.

The nursing assistant’s case was made public through a press release by the main opposition party’s Rep. Suh Jung-sook, saying that a previously healthy 45-year-old nursing assistant who was vaccinated with the AstraZeneca vaccine on March 12 is being hospitalized after suffering from long-lasting headaches and double vision.

The woman has been hospitalized since March 31 with acute demyelinating encephalomyelitis (ADEM), a rare autoimmune disease, and even suffered paralysis of her arms and legs.

Three cases of blood clots were reported in the country, each following AstraZeneca jabs, but it was the first time a case of quadriplegia had been found.

"The medical expenses cost 4 million won [$3,600] a week, but how can I pay them?” her husband wrote in the petition. "I was told by the public health center to submit a batch of claims after the treatment is done, but they said the screening period takes 120 days."

The husband also criticized the government's complacent response, saying the government will not admit that the disease was caused by the vaccine.

Health officials announced Monday that there have been similar cases reported overseas, but no causality has been established with the AstraZeneca vaccine. They continued to point out that the AstraZeneca vaccine manual issued by the European Medicines Agency (EMA) and the Ministry of Food and Drug Safety does not classify ADEM as a side effect.

"An epidemiological investigation was held […] and we will conduct additional tests after a month to make the final diagnosis,” Park Young-joon, head of the abnormal response investigation team of the country’s Covid-19 vaccination team, said in a briefing on Monday.

The husband said the family didn’t hear anything back from the Korea Disease Control and Prevention Agency (KDCA) after their investigation. He wrote, “Whenever I made a call, the KDCA, the City Hall service center and the district health center would just transfer my call to each other.”

He also said he wasn’t able to apply for industrial accident compensation.

“In the office of the Korea Labor Welfare Corporation, there’s a poster that says, 'Covid-19 confirmed victims can apply for industrial accident compensation.' It would have been wiser to get the coronavirus, instead of getting vaccinated.”

“We trusted the government and got the vaccination, but all we got in return was a big punishment. Does the state actually exist? I believed the president when he said he would take responsibility for vaccine side effects, but I feel as if I am betrayed.”

The petition received over 49,000 signatures as of Wednesday, raising interest in the country's possible compensation for vaccine side effects.

Following the president’s order, health authorities said they would review the nursing assistant’s case through a damage investigation panel, where they will evaluate the causality based on examinations and medical records.

"At first, local governments decided that a precise diagnosis was needed by taking an additional medical examination after a month, but then they decided that they could determine the causality even before those results come out, so they requested [the panel review the case],” said Park during an online briefing Wednesday.

After the first round of causality evaluation by the panel, the results will then be conveyed to the damage compensation committee, where they will deliberate options for compensation.

The compensation committee for Covid-19 vaccine side effects is scheduled to be held on April 27 for the first time since the country rolled out its vaccination campaign.