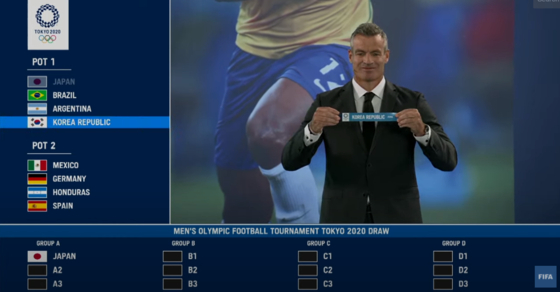 Korea was drawn first in Group B for the 2020 Tokyo Olympics on Wednesday. [SCREEN CAPTURE]


Korea will face New Zealand, Honduras and Romania in the group stage of the football tournament at the 2020 Tokyo Olympics.

Korea was drawn first in Group B during the Olympic Football Tournaments Tokyo 2020 Official Draw on Wednesday. Honduras was the next team called, followed by New Zealand and Romania.

Korea enters the group as the clear favorite, at No. 39 on the official FIFA world ranking, slightly above Romania, at No. 43, and significantly higher than Honduras, at No. 67, and New Zealand, at No. 122.

All four teams have previously competed at the Olympics, but Korea is the only team to have medaled, winning bronze at the 2012 London Olympics. Honduras' best performance was in Rio in 2016, when the team made it to the semifinals to finish fourth.

Romania finished fifth in Tokyo in 1964, but haven't qualified for the Games since then. New Zealand has made it to the Olympics twice, in 2008 and 2012, but has never won a game and never progressed out of the group stage. 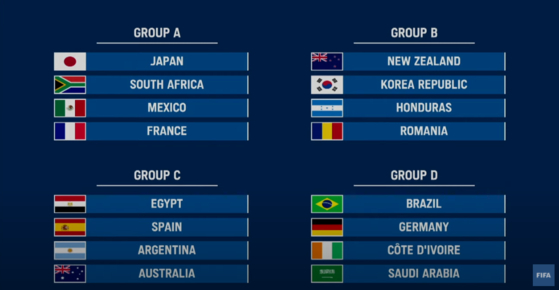 
Japan was drawn in Group A, alongside South Africa, Mexico and France. Egypt, Spain, Argentina and Australia make up Group C, and Brazil, Germany, the Ivory Coast and Saudi Arabia were drawn in Group D.

The winner of Group B will face the runner-up from A in the first round of the knockout stage, so Korea is likely to face a tough challenge in Mexico or France. From Groups C and D, Spain, Argentina, Brazil and Germany are likely to advance out of the group stage, setting up a difficult route to the final.

The group stages are set to begin on July 21.