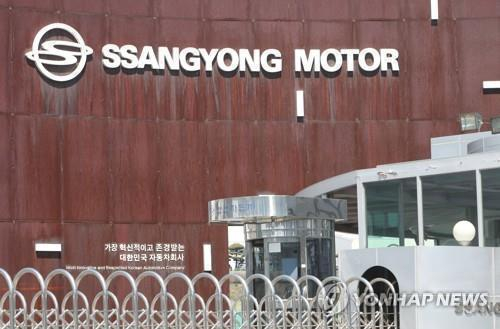 SsangYong Motor will cut up to 10 executive positions as part of its restructuring efforts after being put under court receivership, an industry source said Sunday.

SsangYong Motor has been in a debt-rescheduling process since April 15 as its Indian parent, Mahindra & Mahindra, failed to attract an investor.

According to the source, SsangYong Motor has been considering cutting about 30 percent of its 33 executive positions.

However, the move is expected to face blowback from the automaker's union, which has expressed concerns that such restructuring could lead to more job cuts.

SsangYong Motor also went into court receivership a decade ago.

Court receivership is one step short of bankruptcy in Korea's legal system. In receivership, the court will decide whether and how to revive the company.

SsangYong Motor filed for court receivership late last year after failing to obtain approval for the rollover of 165 billion won ($148 million) worth of loans from creditors.

Under court receivership, SsangYong Motor's survival depends on whether there will be a new investor to acquire a streamlined SsangYong Motor after debt settlement and other restructuring efforts.

Its union has called for management to keep 200,000 jobs at the company and its parts suppliers.

The unionized members agreed to freeze employees' annual salaries, which would save the company 120 billion won.

In the wake of the court receivership and chronic losses, the carmaker has failed to pay half of salaries to its employees this year.