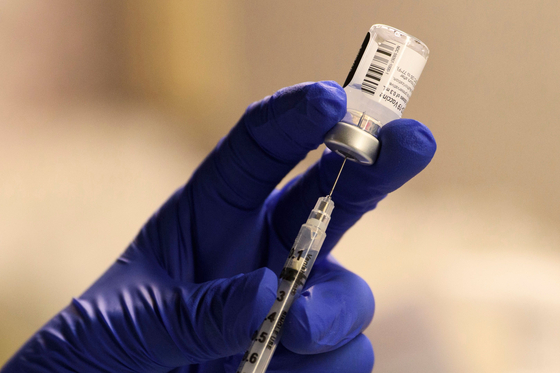 A medical professional fills a syringe to prepare a dose of the Pfizer-BioNTech Covid-19 vaccine for front-line health care workers at a vaccination site at the Torrance Memorial Medical Center on December 19, 2020 in Torrance, California. [AFP/YONHAP]


Vaccines are No. 1 on the minds of Korean people, ahead of any other policy priorities, for Moon Jae-in’s meeting with U.S. President Joe Biden, according to a survey by the Federation of Korean Industries released on Monday.

Of the respondent, 31.2 percent picked the "vaccine swap” as the most desirable outcome from the Korea-U.S. meeting, which is expected to take place at the end of May.

The expectation reflects early media reports that the Foreign Ministry is in discussions with its U.S. counterpart on an arrangement that could supply U.S.-made vaccines in exchange for the vaccine doses later made at Korean facilities.

Foreign minister Chung Ui-yong said the administration is “earnestly discussing” the issue, although the U.S. president and top officials maintain the principle of “America First” in channeling the supply of the shots.

Traditional top agenda items took a back seat. Improving relations between Korea and Japan came second, with 21.1 percent prioritizing the issue, followed by economic topics, including supply chain issues and cooperation in high-tech.

Only 14.8 percent thought that diplomatic strategies regarding North Korea should be at the top of the list.

In a separate question about the tasks that the Korean government should focus on, 71.7 percent cited communication with companies to ensure a stable supply of the vaccines in the face of a slow rollout of vaccines.

As for relations with the U.S., 44.3 percent of the respondents are hoping that the Korean government will more actively align itself with a U.S.-led alliance.

Of the respondents, 37.7 percent said that Korea should keep the strategic ambiguity between China and the U.S., a direction that many believe the Moon administration is taking.