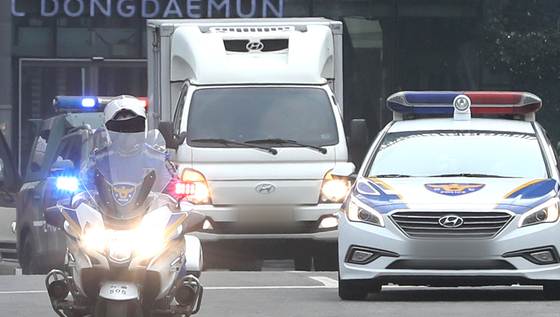 A mock vaccination drill preparing to transport Covid-19 vaccines to the National Medical Center in central Seoul takes place Monday with the cooperation of related government agencies including the Korea Disease Control and Prevention Agency, Defense Ministry and Ministry of Food and Drug Safety. [NEWS1]

The country reported 305 new Covid-19 cases, including 285 local infections, as of Sunday midnight, according to the Korea Disease Control and Prevention Agency (KDCA) Monday, bringing total cases to 78,508.

This was a drop from 355 cases the previous day, following cases ranging in the 400s and 500s in the past week. Sunday marked the lowest number of daily cases since 271 patients on Nov. 23 amid the third wave of infections in the country, but fewer tests are conducted over weekends.

The government announced Sunday it will extend the current social distancing scheme for two weeks, through the Lunar New Year holiday, which runs from Feb. 11 to 14.

Prime Minister Chung Sye-kyun on Monday said the government could possibly review easing some social distancing measures ahead of the Lunar New Year holiday if the situation stabilizes.

Acknowledging the grievances of small business owners, Chung said, “The government went through great pains in reaching its decision to extend the current social distancing measures. If we believe that we have clearly entered a period of stability after we observe the situation this week, we will thoroughly review the easing of additional quarantine measures even before the Lunar New Year holiday.”

Sohn Young-rae, a senior health official of the Central Disaster and Safety Countermeasure Headquarters, said in a briefing Monday, “There is considerable risk should there be increased travel over the holiday,” noting that with a weekly average of over 400 cases last week, there is an even greater chance of transmission between family members and relatives than during the Chuseok harvest holidays last fall.

The government since December has implemented Level 2.5 measures in the greater Seoul area, the second-highest level in its five-tier scheme, and Level 2 in other regions.

Restaurants and cafes in the Seoul metropolitan area are only allowed to offer take-out and delivery services after 9 p.m., while gatherings of five or more people are banned under current measures. 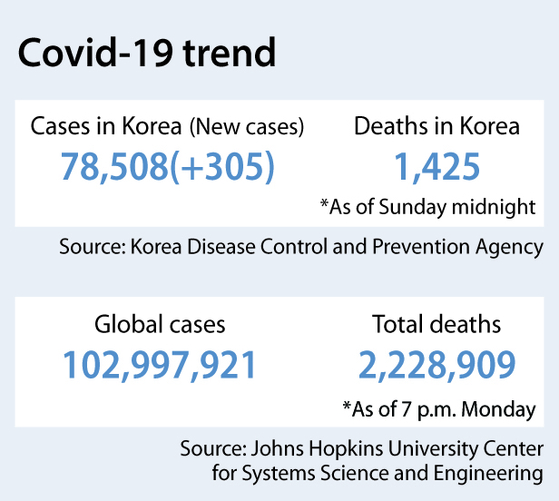 The military likewise decided to allow some time off for recruits who joined the military before Oct. 1 last year and have not had a chance to go on vacation starting Wednesday.

The Defense Ministry since Nov. 26 enforced Level 2.5 social distancing measures which banned soldiers' vacations, but will now allow them to take a leave under the condition the soldier submits a negative coronavirus test and undergoes two weeks of self quarantine upon their return.

Of local transmissions in the metropolitan area, 104 cases were in Seoul, 89 cases in Gyeonggi and 11 in Incheon, according to the KDCA.

One nurse was confirmed Covid-19 positive Sunday evening at the Seoul National University Hospital in central Seoul, city officials said Monday. There were 53 patients in the ward she was assigned to. The ward was put under cohort isolation — the shutting down of an area to separate a group of patients exposed to the virus. The hospital conducted Covid-19 tests on 125 people that had come in contact with the nurse.

Hanyang University Hospital in Seongdong District, eastern Seoul, added 16 cases, reporting a total of 47 cases as of Monday. Government health officials found that hospital caretakers had been lax in mask-wearing. The first Covid-19 case was reported on Wednesday, and the virus is seen to have been transmitted from a family member of an in-patient.

A gositel, a low-cost apartment building, in Dongdaemun District, central Seoul, added nine patients, reporting a total of 10 cases as of Monday after the first patient was confirmed Friday.

A sauna in Seongbuk District, northern Seoul, reported a total of 15 patients after the first case last Wednesday.

Outside of the greater Seoul area, 32 cases were reported in Gwangju, 15 in Busan and nine in Daegu.

The recent spike in regional cases have been mainly linked to a cluster of infections related to the International Mission (IM), a Korea-based Christian missionary group that runs international schools and other education facilities unauthorized by the government in cities including Gwangju and Daejeon.

There are 203 IM-related cases reported in Gwangju, which saw clusters at two TCS International Schools and related churches and a child care center last week, with 13 additional cases as of Monday. A total of 384 cases are related to IM schools and churches nationwide.

The Gwangju city government Monday said that eight high school girls in its Nam District were found Covid-19 positive. One student was infected at the Antioch Church in Gwangju, while the other seven are thought to have contracted the virus at school, according to officials.

The Antioch Church reported 107 Covid-19 cases as of Monday, according to the KDCA. Local health officials expanded tests to all members of the church, not just those who attended the same service as the first patient.

The Central Disease Control Headquarters said Monday that a total of 34 coronavirus variant cases were reported in the country so far — 23 cases of the British variant, six of the South African variant and five of the Brazil variant.

Since Jan. 25, seven new cases of coronavirus variants from overseas were confirmed in Korea. Of the three new variants, believed to be more transmissible, four cases were of the Britain variant, two the Brazilian variant and one the South African variant.

Since Dec. 23, Korea has suspended flights from Britain, and the ban has been extended to Feb. 11. All travelers from abroad are now required to provide papers confirming a negative PCR test taken within 72 hours before their departure for Korea.

Korea plans to kick off Covid-19 vaccinations in late February, starting with medical workers, the elderly and the vulnerable population and move into the inoculation of the general public in the second half of the year. It has procured enough vaccines so far for 52 million people.

A Korean panel of experts confirmed, after a review of the AstraZeneca-Oxford Covid-19 vaccines, that it can be safely administered to people over the age of 65, the Ministry of Food and Drug Safety said Monday.

The independent advisory board review came amid controversy overseas questioning the efficacy of AstraZeneca's vaccine on elderly people over 65. The British-Swedish pharmaceutical giant’s vaccine is easier to store and transport, as well as cheaper than some of its competitors, but also has shown a lower efficacy rate at around 70 percent. The Korean panel’s review showed that the AstraZeneca vaccine’s efficacy rate came at 62 percent.