Rubber meets the road as carmakers face another shortage

Rubber meets the road as carmakers face another shortage 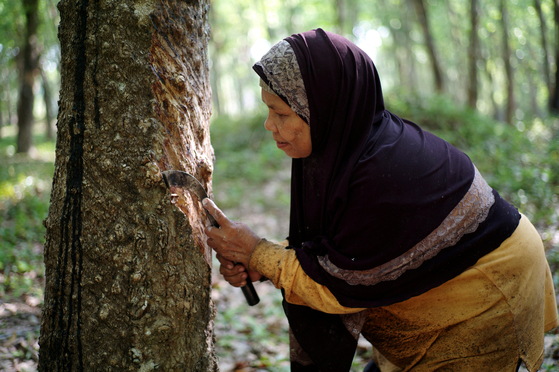 Korean automakers have been struggling to get their hands on semiconductors needed to manufacture vehicles. Bottlenecks in the production of natural rubber, a key material in the making of cars, is the latest headache.

Synthetic rubber can be produced in the petrochemical industry, but it cannot match natural rubber’s high durability, flexibility and water resistance. Tires of large vehicles, latex gloves and sneaker soles are still only made from the natural rubber.

Increase in plant and equipment investment worldwide is pushing up demand for truck and construction equipment tires, increasing the demand for natural rubber.

In February, French-based tire manufacturer Michelin’s tire sales increased by 23 percent compared to a year earlier. Sales of construction vehicles increased as well. According to the China Construction Machinery Association (CCMA), some 292,000 excavators were sold in China’s domestic market by Korea heavy industry companies last year, the highest sales since 2008.

The pandemic is driving up demand for latex gloves.

“High global logistics volume and soaring infrastructure investment caused demand for tires to increase, driving up the price of natural rubber,” said Yoon Jae-sung, an analyst at Hana Financial Investment. “On top of the lack of semiconductors, the automobile industry is also expressing concerns over a possible shortage in natural rubber.”

A few countries have a near-monopoly on natural rubber production.

Some 14 million tons of natural rubber is produced annually around the globe. Malaysia, Indonesia and Thailand - the three largest producers, known as the International Tripartite Council (ITRC) – make 80 percent of the global output.

In 2019, a fungal disease that affected hevea brasiliensis – commonly known as the rubber tree – started in Thailand. This causes trees to loose most of their leaves, harming the ability to produce natural rubber and disrupting plantations. With the biggest suppliers suffering from decreasing farmable land and no substitute for producing natural rubber, prices rose.

“It takes about six to seven years to extract rubber from the hevea tree, and a failure to accurately predict rubber demand leads to heavy price fluctuations” said Ryu Beung-tae, principle researcher at Korea Research Institute of Bioscience and Biotechnology. “The three major rubber producing nations have restricted export and production quantities, also driving up prices.”

“An increase in natural rubber to satisfy higher demand for latex gloves and tires is bound to create a rubber supercycle,” said Yoon.

Natural rubber experienced a supercycle in the past, hitting $3 per pound in 2011. Floods in Southeast Asia and a surge in car demand in China drove up prices.