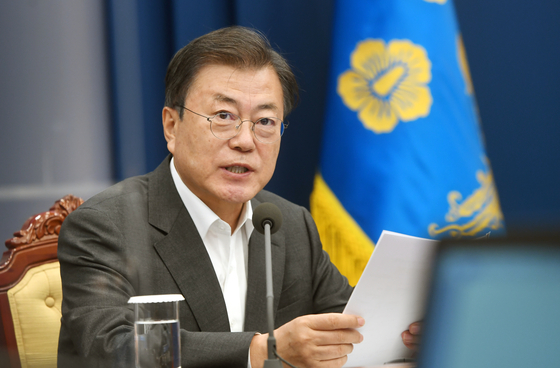 President Moon Jae-in calls out some countries for hoarding Covid-19 vaccine supplies in a meeting with senior secretaries at the Blue House Monday. [JOINT PRESS CORPS]


Some countries are neglecting international Covid-19 cooperation and hoarding vaccines, President Moon Jae-in said, in what appeared to be an indirect jab at Washington ahead of a summit with U.S. President Joe Biden next month.

In a meeting with senior secretaries at the Blue House in, Moon said, “All countries spoke of cooperation during better times, but as the situation in their country became urgent, solidarity and international cooperation became sidelined, and countries are closing borders and controlling and hoarding vaccine supplies, each to one's own.”

Addressing the issue of tight coronavirus vaccine supplies, Moon continued, “We must face the reality of such cold international politics.”

The remarks appeared to be an explanation for Korea's delays in getting vaccine supplies.

While Moon did not specifically mention Washington by name, the United States is responsible for restrictions on vaccine exports as it hastens its own inoculation program.

In contrast, Moon praised Beijing for its donations of Covid-19 vaccines in a video message for China's Boao Forum for Asia on April 20.

The Moon government has been criticized for not signing vaccine deals earlier, especially with mRNA vaccines from Pfizer and Moderna. The Korean government has been scrambling to find additional vaccines, including a contract with Pfizer announced Saturday to purchase 40 million more doses.

The U.S. State Department said last week that Washington is willing to help other countries with vaccine supplies but is more focused on containing the disease domestically.

Washington has indicated that it will be prioritizing Quad countries in terms of vaccine support.

The Quadrilateral Security Dialogue, or Quad, is a security cooperation mechanism involving the United States, Japan, India and Australia, seen as a way to contain China’s rising assertiveness in the Indo-Pacific region.

He said there is “no direct connection” between vaccine supplies and Quad.

Chung repeated the position at the Kwanghun Club last Wednesday that Korea has “received no request from the United States” to join the Quad group.

On April 21, Biden said on Covid-19 responses and vaccines: “We don’t have enough to be confident to send it abroad now. But I expect we’re going to be able to do that.”

The U.S. government said it will be prioritizing vaccine arrangements with neighbors Canada and Mexico, as well as Quad countries, apparently linking the Quad situation to foreign vaccine support,

On the possibility of a vaccine swap with Korea, Ned Price, the U.S. State Department spokesman, said in a press briefing last Wednesday that he is “not going to get into any private diplomatic communications” with Korea.

He continued, “First and foremost we are focused at this stage on the vaccination effort here at home.”

He added, “As we are in a more comfortable and confident position here at home with our own vaccination effort as we have been able to address contingencies that may arise, I expect we may be able to do more, but right now, that’s our focus.”

Price added that Moon’s upcoming summit with Biden is expected to “make clear that our alliance with our treaty allies in the Indo-Pacific, including the Republic of Korea, is strong, and we’re looking for ways to build on that.”

Another spokesperson, when asked if the United States can cooperate with South Korea to provide vaccines, also skirted the question.

“We certainly value South Korea as a strategic partner,” Jalina Porter, principal deputy spokesperson for the State Department, said Friday in a briefing, “but right now, we have nothing to announce when it comes to vaccines in the region.”

Jen Psaki, the White House spokesperson, said in a press briefing Friday, “We’ve made vaccine cooperation a big priority, including with our Quad partners — India is one of our Quad partners, of course — and discussing vaccine creation and distribution for the future.”

Korea’s Ministry of Foreign Affairs denied reports on Friday speculating that Seoul was not included by Washington on its list for potential foreign vaccine support because it has not taken a positive stand on joining the Quad.

Seoul has consistently denied that Washington has offered a formal invitation to join some extended form of the Quad. Korea has been hesitant to take clear sides in the rising Sino-U.S. rivalry, aiming to maintain a balance.

The Korean government could be trying to avoid a repeat of the situation ahead of the deployment of the U.S-led Terminal High Altitude Area Defense (Thaad) that was fiercely protested by Beijing.

The Thaad antimissile system was deployed in Korea 2016 after years of Seoul skirting the issue.

Korea initially took a position of strategic ambiguity over the deployment of the Thaad, with the Park Geun-hye administration stressing its "Three Nos" approach: no request [from Washington], no consultation, no decision. The sudden joint announcement by Seoul and Washington to deploy the Thaad system in 2016 led to strong backlash by Beijing, which felt blindsided. China took economic retaliatory measures against Korea.

Kim Han-kwon, a Chinese studies professor at the Korean National Diplomatic Academy said, "There is a concern that the government is following the precedent of the Thaad crisis, which led to Korea taking the hands of the United States after maintaining the position of 'Three Nos.’ In a situation where the United State has been indirectly sending messages on Quad, there is a need to gradually publicize this and prepare concrete countermeasures.”

Kim Heung-gyu, director of Ajou University’s Chinese Policy Research Institute, said, "If we take a position similar to the ‘Three Nos’ in the Quad issue and eventually have to actually participate, I worry about a situation where China will be very upset or angry. But unlike the Thaad situation, it will be burdensome for the United State and China to completely turn away from Korea, so we have to find a way to secure Korean national interests in this space.”