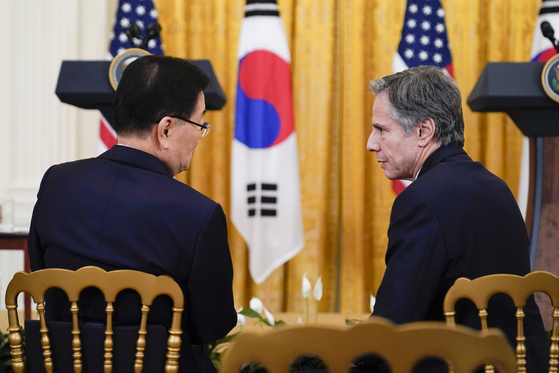 Korean Minister of Foreign Affairs, Chung Eui-yong, left, and U.S. Secretary of State Antony Blinken chat before a joint news conference with President Moon Jae-in and President Joe Biden in the White House in Washington on May 21. [AP/YONHAP]


U.S. Secretary of State Antony Blinken called on NATO members Tuesday to deepen their cooperation with U.S. allies in the Asia-Pacific region, including South Korea — a move which could push American allies closer against emerging “systemic challenges” from China and Russia.

The U.S. State Department said in a statement that Blinken “underscored the importance of Alliance partnerships, including NATO-EU cooperation, and encouraged NATO to deepen its cooperation with Australia, Japan, New Zealand and the Republic of Korea," referring to South Korea’s official name.

Blinken’s request took place during a virtual meeting with NATO foreign ministers which highlighted the Joe Biden administration’s “priority to revitalize our alliances.”

The State Department said that Blinken in the meeting expressed support for the NATO 2030 initiative, “making it more resilient and capable of confronting systemic challenges from Russia and the People’s Republic of China and responding to emerging and evolving challenges, including climate change and hybrid and cyber threats.”

Australia and Japan, as well as India, are members of the Quadrilateral Security Dialogue, or Quad, a security cooperation mechanism led by the United States and seen as a way to contain China.

Korea has so far skirted the issue of joining in the Quad or some expanded form of the dialogue, saying there has been no official request from the United States.

However, the United States has been signaling it will expect stronger cooperation from its allies in Europe and Asia on addressing issues of common values, which could include a more unified stance on China’s rising assertiveness in the region and human rights issues.

Korean President Moon Jae-in and U.S. President Joe Biden held their first bilateral summit in Washington on May 21, and the two sides pledged to restore the alliance in response to “contemporary threats and challenges.”

In their joint statement, the two leaders acknowledged “the importance of open, transparent and inclusive regional multilateralism including the Quad” and stressed that the two sides will work to align visions “for a free and open Indo-Pacific and that our countries will cooperate to create a safe, prosperous and dynamic region.”

They also agreed to address issues critical to regional stability, “such as maintaining freedom of navigation in the South China Sea and preserving peace and stability across the Taiwan Straits.”

A Chinese Foreign Ministry spokesman after the summit relayed Beijing’s concern over the joint statement, stating that Taiwan is  China’s "internal affair."

Korean Foreign Minister Chung Eui-yong in a press briefing on May 25 on the outcome of the summit confirmed that Seoul has “refrained from making specific comments about China's internal affairs.”

On the Taiwan Strait matter, Chung said that the Korean position has not changed and that it is aware of the “unique relations between China and Taiwan” and said that “peace and stability is a common wish shared by everyone in the region."

Moon next week heads to the G7 summit in Britain from June 11 to 13, which includes the United States and Japan. Korea, Australia, India and South Africa have been invited as guests.