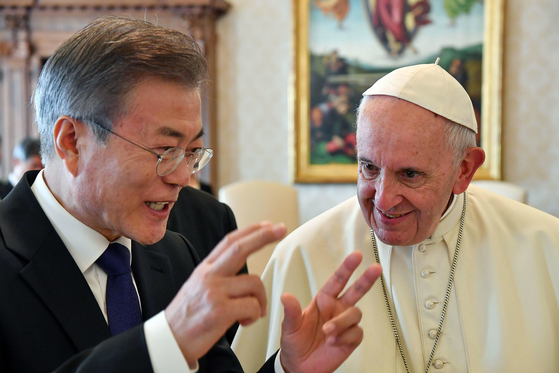 South Korean President Moon Jae-in, left, holds a private audience with Pope Francis at the Vatican on Oct. 18, 2018. Moon extended an invitation from North Korean leader Kim Jong-un for the pontiff to visit Pyongyang, and the pope said he is willing to make such a trip. [AP/YONHAP]


Pope Francis reaffirmed his willingness to visit North Korea, said a senior South Korean bishop Monday, recognizing the tremendous pain of the Korean people who have been separated for 70 years.

Bishop Lazarus You Heung-sik, who heads the Daejeon diocese, told Yonhap News Agency Saturday that the pope made the remarks in a meeting in the Vatican as South Korean Catholics are seeking a papal role in establishing peace on the Korean Peninsula.

You said that the pope recognized how “painful it must be for the same people to live like separated families for 70 years,” since the 1950-53 Korean War, stressing that the Korean people should be able to “live together.”

The pontiff relayed he will visit North Korea if relevant preparations are completed, confirming that he was still willing to visit Pyongyang, should leader Kim Jong-un extend an official invitation.

The idea of a first papal visit to Pyongyang gained momentum in 2018 amid a détente on the Korean Peninsula due to a series of inter-Korean and North-U.S. summits.

The Blue House in October 2018 said that North Korean leader Kim Jong-un had invited Pope Francis to visit Pyongyang. Korean President Moon Jae-in later that month conveyed the message to the pope in a visit to the Vatican. The pontiff replied that he would visit North Korea but would want an official invitation from Kim.

North Korea and the Vatican do not have formal diplomatic relations.

Tuesday marks the third anniversary of the Panmunjom Declaration signed on April 27, 2018, after the first summit between Moon and Kim at the inter-Korean truce village which led way to the first North-U.S. summit in Singapore that June.

However, with a standstill in denuclearization talks since the collapse of the second North-U.S. summit in Hanoi, Vietnam, in February 2019, talks of a papal visit fizzled though the pope has been a staunch supporter of peace on the peninsula and has continued to relay his hopes to visit Pyongyang someday.

The pope also thanked the Daejeon diocese for donating $460,000 to the Vatican after holding a campaign since last November to aid countries in need of Covid-19 vaccines, said You.

The Religious Freedom in the World Report 2021 described in its executive summary, “In China and North Korea, which are the worst offenders in the red category, religious freedom is non-existent, as are the majority of human rights.”

The report added, “In North Korea, no fundamental human rights are acknowledged and the regime targets any group that challenges the personality cult of Kim Jong-un’s rule — although the treatment of Christians is particularly severe. In this regard, the regime can be defined as ‘exterminationist.’”

The report’s section on North Korea notes that the inter-Korean talks and summits between Kim and then-U.S. President Donald Trump “brought some hope for a possible thawing of relations,” but added that “with no further rapprochement and no tangible long-term policy changes in the North, aspirations for any further opening have faded.”

It noted that on Oct 18, 2018, “President Moon Jae-in conveyed a handwritten letter from North Korean leader Kim Jong-un to Pope Francis, inviting him to visit Pyongyang.”

However, the report concluded that despite the overtures, “Only in the case of profound and lasting political and social reforms, or regime change, can any improvements in human rights, and progress in the area of freedom of religion or belief, be expected.”

Pope Francis visited South Korea in 2014, his first trip to Asia since he took papacy, and beatified 124 South Korean Catholic martyrs and prayed for unification on the peninsula.