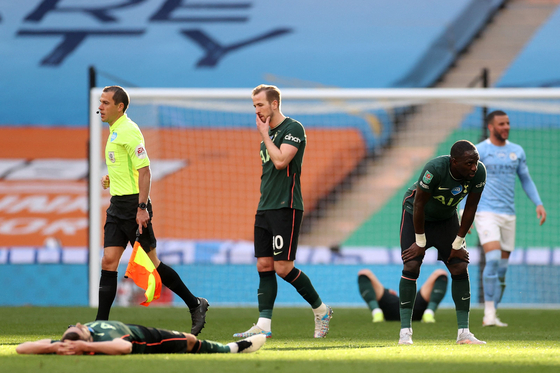 
After a week of turmoil with the Super League debacle, manager Jose Mourinho's untimely departure and a Harry Kane injury, Spurs had nothing left to offer in the Carabao Cup final on Sunday, losing 1-0 to Manchester City.

Manchester City dominated Spurs from the beginning, with perhaps the only surprise at Wembley Stadium in London being that the victors were held to just one goal. City had 62 percent of the possession and 21 shots on goal, four of which were on target, markedly different from Spurs' 38 percent with just two shots, one of which was on target.

Yet, despite the disappointing performance, Spurs were able to hold City to a draw for the majority of the game. The winning goal didn't come until the 82nd minute, with a lackluster Spurs squad stubbornly holding on until the dying minutes of the game.

In the end, it was the head of Manchester defender Aymeric Laporte that broke the silence, giving City the 1-0 win and their fourth Carabao Cup title in a row.

Unsurprisingly, goal keeper Hugo Lloris was the only Tottenham player to receive a rating above 6.00 for the game, getting a 6.25 for the BBC for keeping the score at 1-0. Son Heung-min, who had little impact on the game with no shots, scored 4.48.

Both Tottenham and Manchester were involved in the attempt to form the breakaway Super League earlier in the week, and both clubs have since apologized and pulled out in the face of condemnation from officials, fans, players and managers.

But while Manchester City manager Pep Guardiola was outspoken in his criticism of the Super League, likely sharing the opinion of his players and ensuring there was a team mentality in the dressing room, Spurs unceremoniously fired Mourinho, replacing him for now with 29-year-old former player Ryan Mason.

Mason can hardly be blamed for Sunday's loss — in six days as interim manager he can't be expected to have had much impact on the team — but the decision to fire Mourinho ahead of the game is certainly highly questionable. Opinions about Mourinho's management style vary, and he has undeniably struggled at Tottenham, but he has a track record of rising to the occasion when it comes to big fixtures.

A total of 8,000 fans were allowed inside Wembley Stadium for the game, with 2,000 tickets earmarked for fans of each side. The Spurs fans didn't have much to shout about — perhaps the most animated they got was chanting "We want [Spurs owner Dan] Levy out."