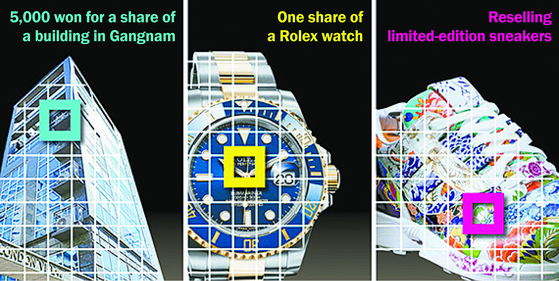 Young Koreans are investing their own way, into unusual assets like fractional real estate and music copyrights. They are even punting on sneakers.

Those in their 20s and 30s are expressing an interest in non-conventional methods of investment that involve small sums of money and are not traditional financial investments.

An office worker in his 20s invested in a 10-billion-won ($8.9 million) building in Yeoksam-dong, southern Seoul last November through Kasa Korea, a digital asset-backed securities platform.

The building was securitized and sold at 5,000 won per share. It paid out a dividend of 47 won per share on Monday for an annual return of 3.1 percent.

According to Kasa Korea, some 54 percent of its users are people in their 20s and 30s.

Sneakers are also popular. On sneaker resale platform Reple, a pair of Nike Dunk Low Retro Black was resold for about 380,000 won. The sneaker was originally priced at 119,000 won.

Resales have been made easier, as traders don’t have to deliver the shoes to the new owner. Reple simply keeps them in its storage and the traders buy and sell ownership certificates.

Younger people are the main target for sneaker resale. According to Reple, over 80 percent of it users are young people who were born in the 1980s, 1990s or 2000s.

Celebrity limited-edition shoes are known for their rarity, which drives up the resell price. Nike’s Air Force 1 Para Noise, a collaboration with K-pop star G-Dragon, was sold for some 20 million won online. The sneakers were originally priced at 219,000 won.

Piece, another joint investment platform, started a watch investment program on April 1 in which people can collectively invest in Rolex watches, such as the Cosmograph Daytona and Datejust. If the watches are resold at a higher price, the profits are divided among the investors.

“Young Koreans are very familiar to using digital platforms and those investment methods,” said Lee June-young, a professor in Sangmyung University’s Department of Consumer and Housing Studies. “The funsumer trend is also reflected in the consumption behavior of the young.”

“Young Koreans are afraid that they may not be able to achieve gains through traditional real estate and stock investments,” said Kim. “Alternative investments are their own ways of finding new investment sources.”

An increasing number of people are scrambling to acquire financial assets through new methods, but investors must be cautious. When buying and selling items through platforms that aren’t authorized by financial authorities, buyers aren’t protected by the Depositor Protection Act or Financial Investment Services and Capital Markets Act.

FDI rises 15 percent in the first quarter to $5.45 billion