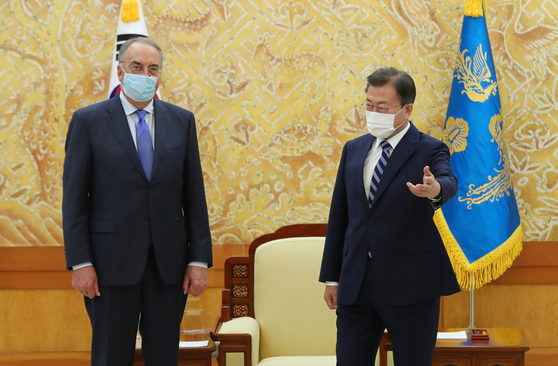 
President Moon Jae-in met Novavax CEO Stanley Erck on Tuesday but revealed little about when its vaccines may be ready for Korea.

It was the first time that the president held a face-to-face meeting with a vaccine pharmaceutical company CEO amid public concerns over a slow rollout of vaccines and their safety.

A detailed delivery schedule or a possible expansion of Novavax vaccine production domestically, which were expected to be discussed during the meeting, were not disclosed.

"Novavax signed a consignment production contract through a technology transfer, and it is being manufactured in Korea," Moon said during the meeting at the Blue House. "The Novavax vaccine is very meaningful to Koreans."

The government announced April 12 that the Novavax vaccine will only be ready in the third quarter of the year — they were expected in the second — and will only be 20 million doses for 10 million people, half as much as expected.

The president expressed high hopes for the Novavax product, noting its advantages.

“I heard that the Novavax vaccine showed high immunity during clinical trials," he said, "and that it was confirmed to have great effect against the British and South African virus variants.”

Novavax recently announced that its vaccine was 96 percent effective in preventing Covid-19 in a phase 3 U.K. trial, higher efficacy than that of Pfizer (95%), Moderna (94%), and AstraZenica (62%).

The Novavax vaccine is made from a purified form of the coronavirus spike protein and also contains an adjuvant, which enhances immune responses. It has a longer shelf life than other vaccines of two to three years, and can be stored and distributed at two to eight degrees.

Novavax, however, hasn’t been approved in any country in the world. The reviewing process by the European Medicines Agency (EMA) and U.S. Food and Drug Administration (FDA) are now expected to be completed by June at the earliest.

"What’s left is the authorization for use," Moon said. "I hope that relevant procedures will be done speedily and the efficacy and safety of the vaccine will be proven enough through that process." 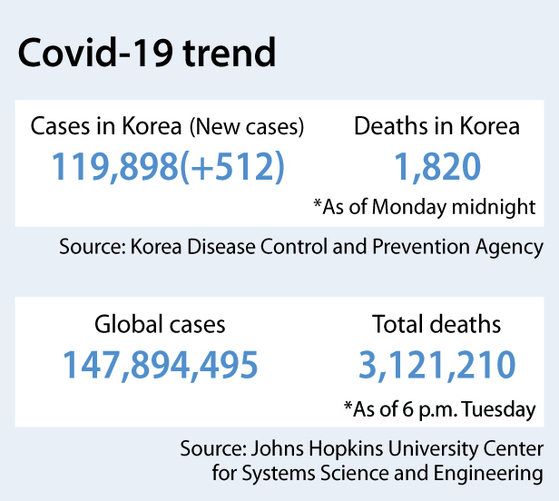