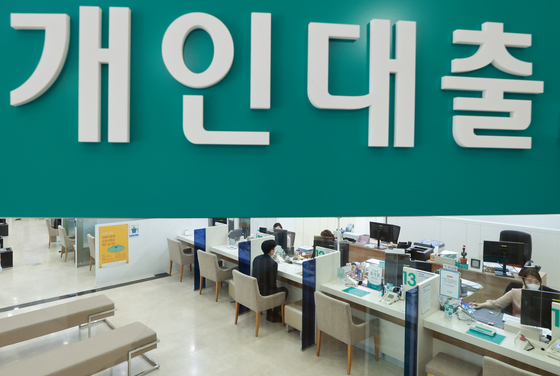 A loan department of Hana Bank in Seoul on Thursday. The government plans to tighten loan regulations to curb the rising household debt. [YONHAP]


Loan rules are being tightened as the financial authorities fear that debt is getting out of hand as a result of excess liquidity.

At the same time, the government is planning to introduce a 40-year mortgage to the market to allow more people with lower incomes to buy a property.

The Ministry of Economy and Finance and the Financial Services Commission on Thursday laid out plans to rein in the runaway borrowing, targeting the debt service ratio (DSR) in specific.

Starting July this year, the 40 percent DSR will be applied to mortgages for properties valued at 600 million won ($541,000) or above, down from the previous 900 million won.

The DSR is the ratio of debt payments to total income.

In the case of properties, it is applied to the housing units located in areas designated by the government as overheated or speculative. All districts in Seoul have been so designated since August 2017.

For unsecured loans, the DSR ratio is applied to those that make a minimum of 80 million won a year.

The DSR ratio is considered a tougher loan restriction than the other methods of limiting lending, such as the loan-to-value (LTV) ratio.

DSR ratios will be extended to all all loans starting July 2023. Currently, roughly 10 percent of loans are subject to DSR.

“The household debt problem needs meticulous inspection and management as it not only has direct relations to average people’s life including jeonse [long-term rent] and housing finances, but it also has the potential of becoming a major risk to the financial system,” said Finance Minister Hong Nam-ki on Thursday. “We plan on gradually slowing household debt growth between 5 to 6 percent for this year and to the 4-percent range next year, which will be the level [of growth] before the Covid-19 crisis.”

According to Bank of Korea, last year household debt including credit card debt totaled 1,726 trillion won, up 8 percent on year and a new record.

The increase of debt was in part the result of small businesses and individuals borrowing to keep their finances above water. Young people borrowing to buy shares and property also pushed the total higher, while record-low interest rates were also a factor.

The government is also tightening loans on land purchases, which became an issue after employees of the state-owned Land and Housing Corp. allegedly purchased using confidential information.

Starting May, the LTV ratio will be applied to non-housing real estate, including land and officetels. And the DSR regulation will also be applied to these assets starting July 2023.

To help support the housing market, the government wants to guarantee 40-year mortgages. The longest mortgage product currently has a maturity of 30 years.

The super-long-term mortgages will only be available to those who meet certain qualifications, including an annual income of 70 million won and a property value below 600 million won. The maximum borrowing will be 300 million won.

Monthly payments on a 40-year mortgage will be about 15 percent less than for a 30-year mortgage, according to government calculations.

No damage for those in need