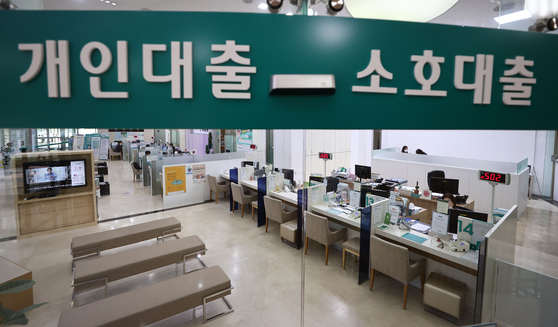 Hana Bank loan department in Seoul on Tuesday. The government announced tighter loan regulations, which will be implemented in January 2022 to curb snowballing household debt. With the central bank raising rates, debt has become a key risk to the economy. [YONHAP]

The credit squeeze continues as regulators place a hard ceiling on how much borrowers can leverage themselves.

Starting January 2022, principal and interest payments on loans will be limited to 40 percent of income if total obligations exceed 200 million won ($172,000). The rule will apply to debts of 100 million won or more from July 2022.

For unsecured loans, the 100-million-won rule will apply from day one.

So, someone earning 50 million won a year will be limited to debt with principal and interest payments totaling 20 million won annually.

The cap already exists, but only for people buying properties costing more than 600 million won in areas deemed overheated or speculative by the government.

For non-banking financial institutions such as mutual savings banks, the debt service ratio (DSR) will be reduced from 60 percent to 50 percent.

The maximum duration for unsecured loans has been reduced from 7 years to 5 years, meaning monthly payments for borrowers will increase.

Initially the government was to apply the tightened loan guidelines from July 2022.

Koh Seung-beom, the hawkish new head of the FSC, has repeatedly warned of the risks of the snowballing household debt, even when he served as a member of the central bank’s monetary policy committee.

With the central bank increasing the base rate, the cost of servicing loans has increased already.

According to the Bank of Korea, household loans not including credit card debt amounted to 1,705.3 trillion won as of the second quarter of this year. That’s a 10.3 percent increase year-on-year.

“While there is uncertainty lingering regarding Covid-19 measures, the process towards returning to normal has started,” FSC Chairman Koh said Tuesday. “In the process of recovery, we have to be mindful of firmly maintaining financial stability.
“Recently, there has been increasing uncertainty in global finance. The domestic economic and financial situation isn’t easy, with the real estate market showing signs of overheating and the rate at which debt is increasing exceeding estimates.”