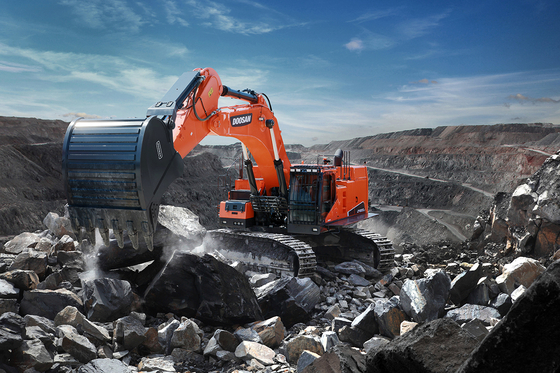 
The construction equipment market is growing fast as countries rev up plant and facility investment.

“Now we have to worry about sourcing parts,” said a spokesperson for Doosan Infracore. “Our procurement team is extremely busy.”

The construction equipment industry performed poorly last year due to the coronavirus pandemic, which forced companies to postpone investment plans. But the industry is recently thriving due to the influx of contracts from foreign countries.

On April 25, the company signed a contract with a Qatari-based construction company to supply 102 excavators, the largest contract the company has won from a single customer in Qatar.

Hyundai Construction Equipment signed a deal to supply a total of 104 pieces of construction equipment to Qatar and Colombia including 56 excavators and 40 backhoe loaders.

Hyundai Construction Equipment's net profit for the first quarter rose 4,850 percent on year to 59.4 billion won ($53.6 million). The company's operating profit and revenue both hit an all-time highs, the former 79.7 billion won and the latter 964 billion won, up 664.9 percent and 51.6 percent on year, respectively.

“Covid-19 pushed up demand for do-it-yourself gardening, increasing our sales in the United States,” said a spokesperson for Doosan Bobcat. The equipment manufacturer sells light construction machinery, such as mowers, widely used for gardening and landscaping.

Investment for facility expansion and price increases of raw materials are helping.

“Last year’s facility investment plans of Middle Eastern countries were pushed back due to Covid-19, flooding us with construction equipment orders for this year,” said a spokesperson for Doosan Infracore.

Higher price of raw materials, such as steel, copper and rubber, is also helping as construction equipment is essential to produce and ship such commodities.

“At the end of 2019, it was anticipated that 2020 would see a modest downturn in global construction equipment sales, but the forecast for 2021 and beyond is now generally better than was expected prior to the Covid-19 outbreak,” said Off-Highway Research, a market research firm specializing in construction equipment data.

Experts say that the machinery market must take advantage of the opportunity.

“Construction equipment is a must for big ticket investments in the semiconductor and battery sectors, but Korea’s top companies still fall behind in terms of brand recognition and market share when competing in advanced markets of North America and Europe,” said Jeong Man-tae, a senior research fellow at Korea Institute for Industrial Economics & Trade (KIET). “We need to establish new market strategies by integrating IT technology.”