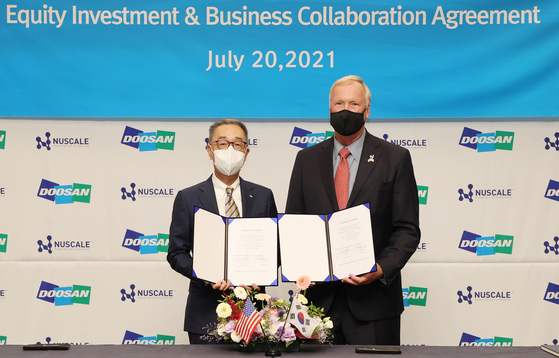 
Doosan Heavy Industries & Construction has invested $60 million into NuScale Power, the company announced on Tuesday, in a move that deepens its financial and business ties with the U.S. provider of small modular reactors.

No details were given about the amount of the company that will be owned by the Korean builder.

The decision comes after Doosan Heavy made an equity investment of $44 million into the Tigard, Oregon-based company.

With the follow-up funding, Doosan and NuScale could further cooperate in small modular reactor manufacturing in business that could top 1 trillion won ($871 million).

“Doosan’s expertise in heavy manufacturing will be invaluable as we move forward with the construction of our first NuScale Power Plant at the Idaho National Laboratory in just a few years, and we are thankful for their ongoing support and endorsement of our groundbreaking technology,” he said in the statement.