Moon and other mourners pay last respects to former archbishop

Moon and other mourners pay last respects to former archbishop 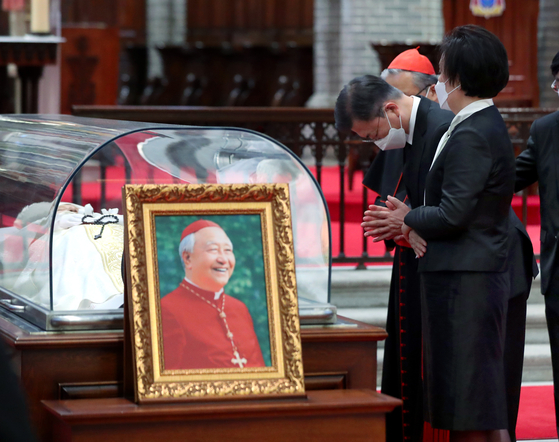 
Thousands of mourners, including President Moon Jae-in, expressed their condolences over the death of Cardinal Nicholas Cheong Jin-suk, a former archbishop of Seoul, at the Myeongdong Cathedral Thursday.

Cheong, who died Tuesday at the age of 89 due to ailments related to old age, is laid in a glass coffin at the cathedral in central Seoul, and the public will be able to pay their respects through Friday.

Moon and first lady Kim Jung-sook, both Catholics, visited the cathedral at 9:10 a.m. and prayed under the guidance of Cardinal Andrew Yeom Soo-jung, the current archbishop of Seoul.

Father Heo Young-yeop, the spokesman of the Catholic Archdiocese of Seoul, said that Moon afterwards thanked the Catholic Church for its compliance to Covid-19 social distancing measures.

Moon expressed regrets to Yeom that the “great elder has left at this difficult time,” adding that he was “thankful to the cardinal for leaving behind a meaningful present about what life is truly about.”

The archbishop in turn said that Cheong “suffered from ailments for two months but left peacefully.”

Yeom added, “In accordance to Cardinal Cheong’s will, I will also pray for South and North Korean politicians.” Cheong had been a strong advocate of reconciliation, peace and unification of the Korean Peninsula.

Some 10,000 people including politicians, religious leaders and celebrities have visited Cheong’s memorial altar since it was open to the public Wednesday, according to spokesman Heo. Acting Prime Minister Hong Nam-ki, National Assembly Speaker Park Byeong-seug and Seoul Mayor Oh Se-hoon were among politicians who visited.

Venerable Wonhaeng, president of the Jogye Order of Korean Buddhism, said in a condolence message on Wednesday that Cheong “throughout his life wanted the church to become the light and salt of society and paid a lot of attention to social welfare for the poor.”

He added, “Religious leaders will continue on in the spirit of peace and reconciliation left by Cardinal Cheong.”

In keeping with his motto of “omnibus omnia,” meaning in Latin, “All things to all men,” Cheong donated his organs and corneas. He also donated his entire savings to soup kitchens, religious education facilities and the staff of the hospital he was treated at.

Ahead of his death, Cheong requested that his organs be used for research purposes in the case that they were not suitable for donation because of his old age.

Heo confirmed Thursday that Cheong’s corneas had been donated for medical research.

Cheong, an expert in canon law, was named bishop of Cheongju in North Chungcheong in 1970, becoming the youngest bishop in Korea at the age of 39. From 1998 to 2012, he served as the archbishop of Seoul and the apostolic administrator of the diocese of Pyongyang. He was made a cardinal in 2006 by Pope Benedict XVI.

The funeral mass will be broadcast live on Myeongdong Cathedral’s official YouTube channel Saturday starting at 10 a.m. Cheong will be buried in a Catholic cemetery for priests in Yongin, Gyeonggi.