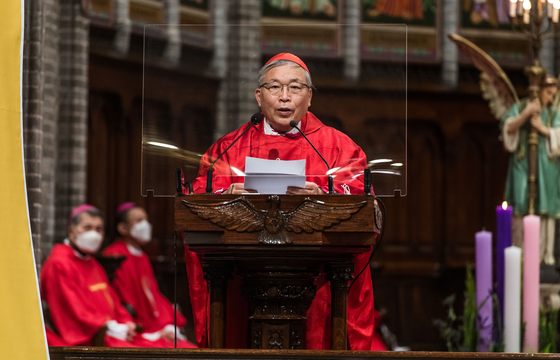 Cardinal Andrew Yeom Soo-jung, 78, makes his final speech as Archbishop of Seoul at a mass in Myeongdong Cathedral in Jung District, central Seoul, on Tuesday. [YONHAP]

A mass in Myeongdong Cathedral in Jung District, central Seoul, was held on Tuesday morning to honor Yeom, 78, and his work as the 13th archbishop of Seoul and apostolic administrator of Pyongyang.

Some 600 members of clergy including the Papal Nuncio, or the Pope’s envoy to Korea, Archbishop Alfred Xuereb, attended the mass. In adherence to Covid-19 regulations, all attendees wore masks and were seated apart.

“After spending 51 years as a priest, 20 years as a bishop and over nine years as the Archdiocese of Seoul, I have always bore the weight of the cross on my shoulders, which was challenging at times,” Yeom said.

“Nonetheless, it was because of God’s grace and the support and confidence that my fellow brothers and sisters gave me that I was able to successfully complete my term as the Archbishop of Seoul.”

“I always took comfort in words that my predecessor [Cheong] said to me -- that I should leave everything up to God.”

Appointed in June 2012 as the Archbishop of Seoul, Yeom retired after nine years and five months in the job.

He submitted his resignation to Pope Francis three years ago when he turned 75. All members of clergy are asked to offer their resignations when they turn 75, according to the canon law of the Catholic Church.

Born into a Catholic family in Anseong, Gyeonggi, Yeom graduated from the Catholic University of Seoul in 1970 and was ordained a priest the same year.

He became a bishop in 2002 and was nominated as Korea’s third cardinal by Pope Francis in February 2014. Yeom is the only living Korean cardinal today.

Apart from his archbishop post, Yeom is also Chairman of the Episcopal Commission for Clergy of the Catholic Bishops' Conference of Korea and Moderator of the Korean Missionary Society and Pontifical Korean College, which is located in Rome.

On Monday, Peter Chung Soon-taik, 60, was chosen by Pope Francis to succeed Yeom as Archbishop of Seoul and apostolic administrator of Pyongyang.

Chung’s official inauguration mass will be held in Myeongdong Cathedral on Dec. 8 at 10 a.m.

Chung graduated from Seoul National University in 1984 with a chemical engineering degree before becoming a student at the Catholic University of Korea to become a priest.

As the three latest archbishops of Seoul -- Yeom, Stephen Kim Sou-hwan and Nicholas Cheong Jin-suk -- were made cardinals a few years after becoming archbishop, Chung is in line for this promotion.