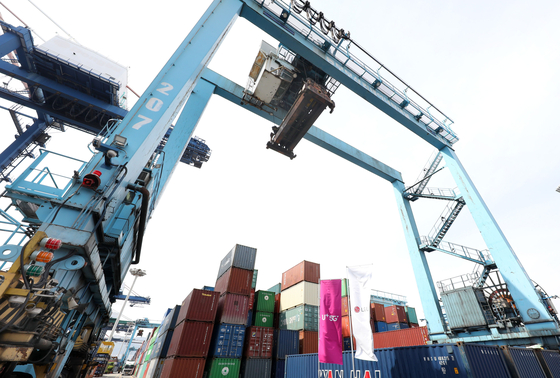 Yard crane No. 207 in Dongwon Pusan Container Terminal in Busan port. [LG U+]


BUSAN — Yard crane No. 207 in Dongwon Pusan Container Terminal looks like a massive claw machine, except that the objects it transfers are not dolls or toys, but containers weighing up to 32 tons.

Using its steel claws, or "spreaders," these transfer cranes load and unload containers from trucks and stock them up in the shipping yard like building blocks.

The way the equipment operates looks simple — not very different from how a claw machine would pick up toys. But being the human controller behind this equipment is not easy.

Being an operator of one of these huge machines means you have to climb up to a cockpit 25 meters (82 feet) above ground and remain stuck inside the space for long hours, no bathroom breaks allowed. Matching up the four corners of containers to stack one on top of another can be an arduous task with just one's bare eyes straining to see from the cockpit. Mistakes lead to grave results, as falling containers can be fatal to any unfortunate human peers on the ground.

Among the more than 300 transfer cranes in Busan port, what makes No. 207 special is that it can operate unmanned and be controlled remotely from a room 30 meters away. The secret is in the 5G network embedded in the area and No. 207's spreaders that contain six sensors and four cameras.

"Currently, it takes four people on a shift to control one crane around the clock," said Kim Kyung-woon, a manager from mobile carrier LG U+'s smartinfra business unit, during a press tour Thursday.

On the contrary, one person would be able to control three to four cranes at once if they could be remotely controlled, LG claims.

"There are also limits to the number of containers that can be stacked with your bare eyes: Three or, maybe, four," Kim added. "If using a remote control, we can stack up to five, which would enhance the space efficiency within the port."

Based on the signals sent by the human controller, the crane automatically moves its spreaders to the container's spot and sends real-time videos as it descends, allowing the staff to check whether the claws are precisely attached to the container's four corners. While this is all happening, the staff sits behind an office desk with joy sticks, buttons and three screens, instead of being stuck inside a cockpit hanging in the air. 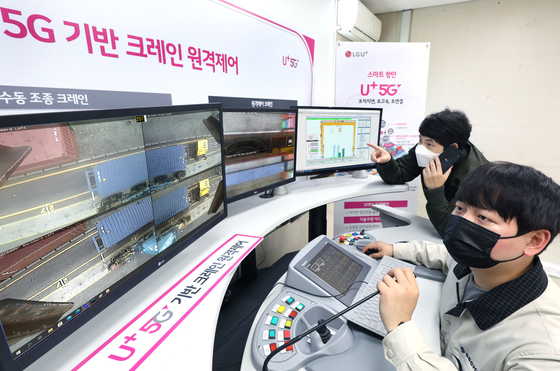 Real-time video of the remote-controlled yard crane is sent to a control room 30 meters away from the site. [LG U+]

LG U+ was selected to be a partner of the government's "smart port" project in Busan in 2019, and since then it has been developing ways to use 5G network in the shipping industry with smaller domestic partners. Having completed the establishment of a 5G network in the area this year, the remote-controlled yard crane is the team's first outcome.

"Our goal is to develop all kinds of technology that could be labeled as 'smart port,'" said Suh Jae-yong, LG U+'s vice president and head of the smartinfra business unit.

"If you think about autonomous driving, for example, a port has the best conditions to test this technology, as tractors run on designated routes inside a fixed space. If we can attach sensors on containers and vehicles and retrieve data from them, we'll be able to find a score of new ways to increase work efficiency in port terminals."

According to LG, technical efforts to make port terminals even smarter are already ongoing in other countries like Singapore and China. However, Korea's technology in automating port equipment is relatively undeveloped.

Suh says 5G can be a game-changer for domestic ports as it offers the largest bandwidth and lowest latency when compared to previous telecommunication networks. This would allows a large number of devices to be connected at once and videos could be shared in real time with barely any delays.

Low latency matters when controlling devices remotely in industrial sites such as the port terminal because equipment is huge and buffering videos, even for just a few seconds, can lead to big accidents. According to the company, LG U+'s 5G-powered video monitoring system reduces the time spent on transferring videos by 84 percent compared to what it would take on a 4G LTE network.

LG's goal is to provide the 5G network and video monitoring service for remote-controlled cranes in the ports of Busan and Gwangyang, South Jeolla, in the near future. Other "smart port" technology it suggested to develop are: Artificial intelligence-powered video analysis systems that could automatically detect fire sparks or smoke; self-driving drones; and a "digital twin" of the port terminal which would act as a virtual replica of an industrial site to run simulations.

"The top 10 largest ports in the world are all developing technology to adopt 5G on features like remote-controlled equipment and autonomous tractors," said Suh. "So years from now, this could be an important factor in deciding a port's competitiveness."