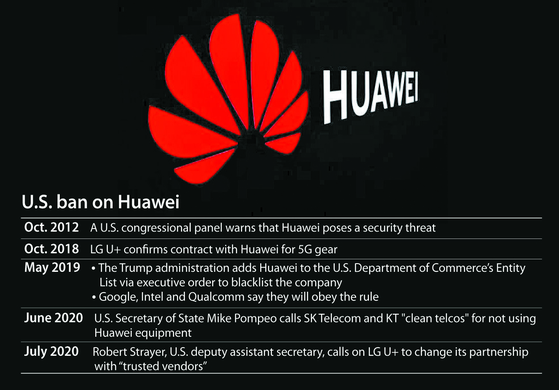 Faced with the United States’ push to wean telecom companies off Huawei, mobile carrier LG U+ has been in the crosshairs due to its longstanding partnership with the Chinese tech giant.

Still, the fact that Huawei’s technology forms the backbone of LG U+’s existing networks — both 5G and 4G LTE — complicates the quandary facing the carrier, which is the smallest of the three major telecom operators and the only one to use 5G equipment produced by Huawei.

LG U+ has scrambled to ease security concerns surrounding its ties with Huawei, following recent warnings by high-ranking U.S. politicians.

“One thing that's clear is that there is no security problem with Huawei’s 5G network,” said a spokesperson at LG U+ on Wednesday who refused to be named due to the sensitivity of the issue.

The view is certainly at odds with the top U.S. officials — not to mention President Donald Trump — who have pushed the Korean telecom company to stop using Huawei equipment.

Robert Strayer, the U.S. deputy assistant secretary of state for cyber and international communications and information policy, urged LG U+ to partner with “trusted vendors” instead of the beleaguered Chinese company during a press event last week.

LG U+ confirmed that its other 5G vendors include Ericsson, Nokia and Samsung Electronics, alongside with the Chinese supplier, adding that Huawei’s equipment covers the Seoul and Gyeonggi area.

This is not the first time that the mobile carrier has been in the hot seat due to its connection with Huawei.

Ahead of President Trump’s visit to Korea last June, it had to replace the Huawei equipment used in base stations located near the U.S. Army’s Yongsan Garrison in central Seoul, according to multiple media reports. LG U+ was also put in a tough position last year when SK Telecom and KT both publicly pledged not to use Huawei equipment in the 5G networks they were developing at the time.

Despite mounting pressure, industry insiders say that removing Huawei-produced equipment altogether is practically impossible due to the costs involved.

“When choosing a 5G vendor years ago, it was quite rational for LG U+ to go for Huawei,” a source in the telecom industry said.

“In the non-standalone mode of 5G that Korea has embraced, the compatibility with existing 4G LTE network equipment is critical because they need to keep on communicating,” the source said. “Since LG U+ uses Huawei 4G LTE gear in Seoul and Gyeonggi, the best 5G vendor candidate was Huawei on top of their competitive prices.”

Analysts and sources said that a more likely scenario will be LG U+ gradually reducing its reliance on Huawei for future supply contracts.

“LG U+ will likely increase its reliance on other vendors like Samsung and Nokia to gradually phase out Huawei starting 2021,” said Kim Hong-sik, an analyst at Hana Financial Investment.

“Given that Huawei tends to charge higher maintenance fees compared to the lower price of equipment, the increase in operating costs for transferring to other vendors would not be that high,” Kim said, estimating that the cost will range from 20 billion won ($17 million) to 30 billion won.

Now the focus is on whether LG U+ will stick with Huawei in the process of migrating into standalone 5G, a more advanced version of 5G with lower latency.

The mobile carriers plan to set up standalone versions within this year.

Although LG U+ declined to comment on vendors for its upgraded 5G network, Huawei expressed its expectation in a statement released in January on its official website.

“Following this success, the operator is now focused on expanding coverage and service offerings,” the statement read. “It expects to start 5G standalone tests in the fourth quarter and aims to be ready for commercial use in the first half of 2020.”

All three mobile carriers have delayed the switch due to the coronavirus pandemic.