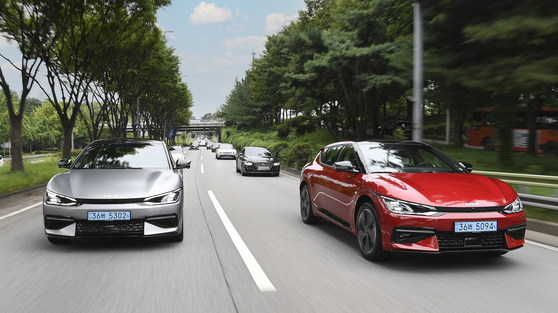 Kia's all-electric EV6 SUVs are on the road. [KIA]

Kia’s all-electric EV6 SUV doesn't look too aggressive on the outside but lets out its hidden beast when it hits the road.

The Korea JoongAng Daily got behind the wheel of a long-range version of the four-wheel drive EV6 on Thursday to try a 140-kilometer route on the outskirts of Seoul.

The first thing one notices, of course, is the exterior, which doesn’t look much different from internal combustion engine SUVs. Its cousin and rival, Hyundai Motor's Ioniq 5, attempt a completely new look, with a grille-free front and pixel-inspired headlamps.

In contrast, the EV6 blends in well with the average car buzzing along the road.

The design is aerodynamic, with a slanted roofline resembling that of a coupe, which gives an aggressive and masculine look when matched with a wing-type roof spoiler at the end. 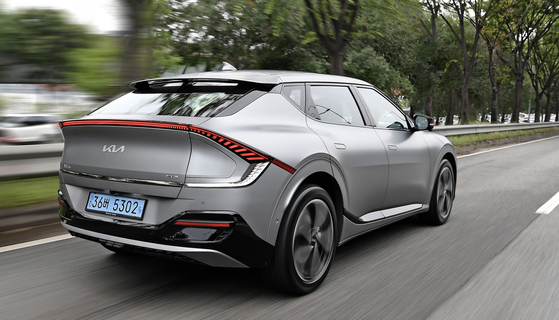 The designers of Hyundai Motor’s Ioniq 5 had big ambitions for the center console, which moves back and forth to ensure more space in the front seats. The engine button and gear shift are positioned beside the steering wheel as a result.

The EV6 sticks to convention with the engine button and a gear dial on the center console.

But even conservative designers like to show off their digital smarts.

They designed a 24.6-inch digital display that incorporates the digital dashboard and an infotainment screen. The head-up display uses an augmented reality navigation function. 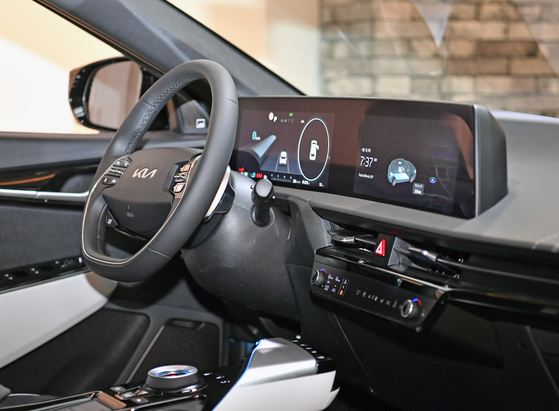 Interior of the Kia EV6 [KIA]

Once the EV6 got on to the road, its driving performance was far from gentle.

In its Sport driving mode, the car had impressive thrust, reaching  170 kilometers per hour effortlessly. Even at that speed, it felt like the car was eager to go faster. Traffic, unfortunately, didn't allow it.

A high-performance GT version expected next year will be even more powerful. The GT version will reach 100 kilometers per hour within 3.5 seconds, according to Kia.

What was also surprising about the EV6 was its performance on a wet, winding course. Despite it being a heavy, battery-powered vehicle, it firmly gripped the road without slipping at speeds of just under 100 kilometers per hour.

This car, which has 20-inch tires, has an official range of 403 kilometers per charge. The 140-kilometer test drive session started with 350 kilometers on the battery and when the session finished, it was left with 237 kilometers. It means about 27 kilometers were saved by the battery using the regenerative braking function, which allows the car to charge itself from its kinetic energy as it slows down.

The price for the base trim of the EV6 starts from 47.3 million won.

Kia's Q3 net is down due to engine provision