JIFF kicks off with a big shout-out to Myanmar protestors

JIFF kicks off with a big shout-out to Myanmar protestors 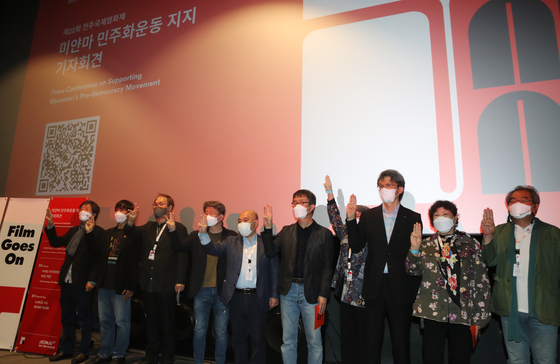 
JEONJU, North Jeolla - The Jeonju International Film Festival (JIFF) was the first such event of the 2021 season and began with a clear message.

A total of eight film festival directors at the 22nd JIFF gathered at the CineQ multiplex theater on Friday to show their support for the Myanmar’s democracy movement with two representatives from Myanmar Democracy Network in Korea.

The press event began with the screening of short film “Burma Spring 21,” made by independent filmmakers and illustrators showing protests led by civilians since the coup d'état in February. After the screening, the eight directors took turns reading a statement in support of Myanmar democracy.

“We believe that Myanmar will be victorious in the end,” the statement reads. “Our small support and solidarity will be of assistance to Myanmar’s victory. And we know that our physical, mental support will provide a stimulus forward in their fight. So we will be together with the Myanmar civilians and their fight until the end. We will send relief supplies and daily necessities. We will send funds. We will share our past experiences and manuals of protests. We will be together in our victorious history.”

“We were trying to come up with ways that we can show our solidarity in pro-democracy movement of Myanmar, when we heard that Myanmar cineastes were captured or were ordered to be detained,” Kim Sang-hwa, a festival director, said. “Firstly, we decided to hold a gathering to read out loud our statement, and we will continuously look for ways we can show persistent unity.”

Director Lee Joon-dong said that the festival committee collected funds from 655 people in non-profit civil organizations to donate the money to the network after the event.

“I believe that the current Myanmar’s pro-democracy movement is the same as our May 18 democracy movement,” director Lim Soon-hye said of the Korean movement in 1980. “So we are planning to screen films such as ‘Burma Spring 21’ and is preparing a special section for Myanmar for screening.”

“I think that this event was made to support and cheer for Myanmar citizens bravely fighting,” representative Soe Moe Thu said. “It will be an enormous help to us. Myanmar’s future is bright. We have hope.”

Director Lee did not specify in numbers how many local film festivals will be a part of this campaign, but he guaranteed that all Korean cineastes showed their support in the short time the festival tried to gather support. He gave as an example of the support of the newly-established Buddhist Film Festival this year.

“We’ve been preparing this campaign in a short span of time, and we weren’t able to notify every single film fest,” Lee said. “But the word spread, and soon every single local film fest showed their support for Myanmar, even the newly-established Buddhist Film Festival this year. We can say that all film festivals, all cineastes are supporting Myanmar’s democracy.”