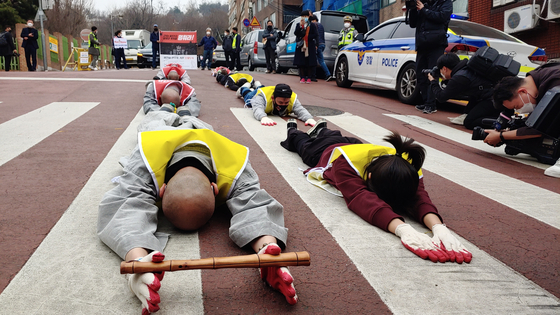 Members of the Social and Labor Affairs Committee of the Jogye Order of Korean Buddhism perform an ochetuji, or full prostration in Buddhism touching five parts of the body to the ground, for Myanmmar on March 12 in Seoul. [SOCIAL AND LABOR AFFAIRS COMMITEE OF THE JOGYE ORDER]


Amid growing violence and human rights abuse from the military in Myanmar, Buddhists in Korea have stepped up to support the democratization movement of the country, where Buddhism is practiced by 90 percent of the country's population.

"I'm here to support Myanmar's nonviolent peaceful demonstration," said Ven. Jimong, chairperson of the Social and Labor Affairs Committee of the Jogye Order, the nation’s largest Buddhist sector, in front of the Myanmar Embassy in Seoul on March 12.

After delivering a long speech condemning Myanmar's military, Ven. Jimong put down his microphone and held a jukbi, or a bamboo clapper.

When Ven. Jimong clapped the jukbi in the front of the group, a few men in monk’s robes, joined by four Burmese participants, knelt on their knees with their hands together as if in prayer. Then, they unfolded their hands and bowed forward, putting their hands and forehead on the ground. On the vests they wore over their robes, there were phrases written in Burmese and Korean hoping for Myanmar's democratization.

With the sky covered by thick clouds of fine dust and raindrops falling, the ochetuji, or full prostration in Buddhism where the person touches five parts of the body — the knees, elbows and forehead — to the ground, continued for over five hours, repeating the exercise and inching forward with every clap of the jukbi. Even with dirt covering their clothes and black soot on their forehead, they continued.

It was not until they reached Jonggak in central Seoul, 6 kilometers (3.7 miles) away from the Myanmar Embassy, that the sound of the bamboo clapper stopped.

Ven. Jimong then stood up and delivered a letter to the Seoul office of the United Nations Commission on Human Rights, calling for effective measures for the safety of the Burmese people.

The ochetuji for Myanmar was based on Ven. Jimong's theory that “religion should be involved in people's lives and problems and should be together in places where people suffer.”

This is why he started a voluntary hospice service at the National Medical Center since early 2017. He stood by people in their deathbed and helped them put everything down and say goodbye to the world.

“The more I helped people die peacefully, the more I wanted to help,” Ven. Jimong said. 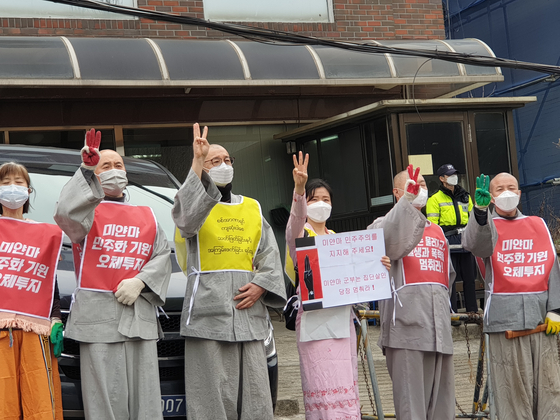 Members of the Social and Labor Affairs Committee of the Jogye Order raise three-finger salutes to show solidarity with Myanmar on March 12. [SOCIAL AND LABOR AFFAIRS COMMITEE OF THE JOGYE ORDER]


The Social and Labor Affairs Committee Ven. Jimong is in has been speaking out against various areas of society, including human rights violations, industrial accidents, isolated deaths and unfair dismissal. Losses, including those who passed away in the Korean War, Vietnam War, Jeju Uprising, Gwangju Democratic Movement, sinking of the Sewol ferry, suicide of financially struggling families, and the suicide of Byun Hee-soo — the first known transgender soldier in Korea — are all subjects in the Committee's memorial.

After being elected as chairperson of the committee last January, Ven. Jimong had to witness from afar the military coup in Myanmar and their brutal suppression against the citizens who staged nonviolent pro-democracy protests.

“I couldn’t believe there were killings in a Buddhist country,” he said, and could not turn away from the situation even though it was a different country.

Starting with the prayer at the embassy for those killed by the military in Myanmar on Feb. 25, Ven. Jimong continued doing various activities, such as the ochetuji march during March and the memorial prayer on March 27 at Jogye Temple.

Believing it is a religious person’s duty to go to the scene of peoples' suffering and sorrows, Ven. Jimong made requests to the Myanmmar Embassy in Korea for special entry permits with Ven. Hyedo and Ven. Jongsu. Three weeks later, however, the embassy denied the special entry permits for the three monks.

“We were told by the [Myanmar] embassy staff, who delivered the news, that the Foreign Ministry’s decision is the same as the Myanmar military’s decision,” Yang Han-woong, a committee official, said in a statement.

Although their special entry was thwarted, Ven. Jimong said that he will continue to pray for Myanmar while trying to find another way.

“Although I cannot be in Myanmmar, I will continue to pray for their peace and solidarity until the day when murder, violence, danger and pain disappear,” he said on Buddha’s Birthday on Wednesday, adding it is his earnest wish to resemble Buddha’s teaching of social engagement.