[ZOOM KOREA] Spreading the spirit of sharing through rice cake

[ZOOM KOREA] Spreading the spirit of sharing through rice cake 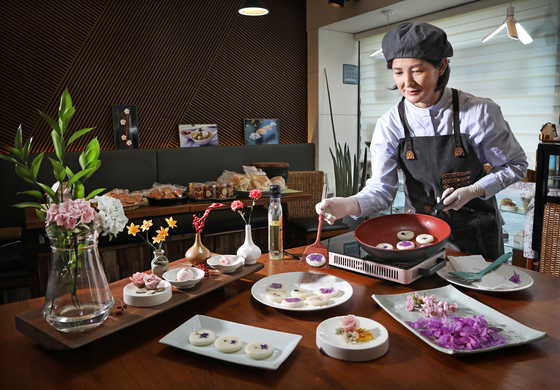 
Korea has a saying that goes: “a tteok (rice cake) that looks good also tastes good."

People expect rice cakes with beautiful colors and shapes to taste better. That’s why the artistry of “tteok craft" makes tteok that not only tastes good but is also pleasing to the eye, with edible flower and fruit-shaped decorations that transform tteok into a work of art.

Kim shares joy and happiness via her beautiful tteok at her workshop, which attracts visitors who want to learn the craft as well as tourists who visit the fortress. 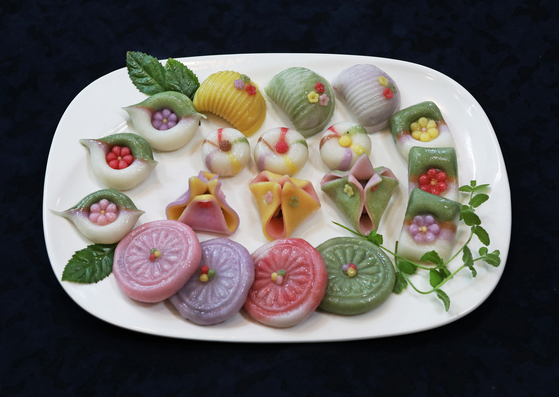 
Kim had an interest and talent in crafts from a young age, as she enjoyed making things with her dexterous father. Whenever her village had a wedding, she was mesmerized by the colorful food for pyebaek (a traditional Korean wedding custom in which the newlyweds honor the groom’s parents) which looked like art. Clay art was her hobby during college and she even made money by teaching the craft to students.

After marriage, a relative of Kim who made pyebaek food for a living suggested that she give it a try. While learning the craft from her relative, Kim enjoyed making tteok the most and took special interest in it. She fell in love with tteok as she continued to learn how to make various kinds.

Kim officially entered the world of tteok at the relatively late age of 39, when she started taking pyebaek food and ibaji food (traditional Korean wedding banquet food) classes at the Suwon Family Women’s Hall. She showed exceptional talent and shortly after became the teaching assistant of the class.

Kim continued her studies at the Institute of Royal Korean Dessert and Myongji University’s Graduate School of Industry to gain a deeper understanding of traditional Korean food. 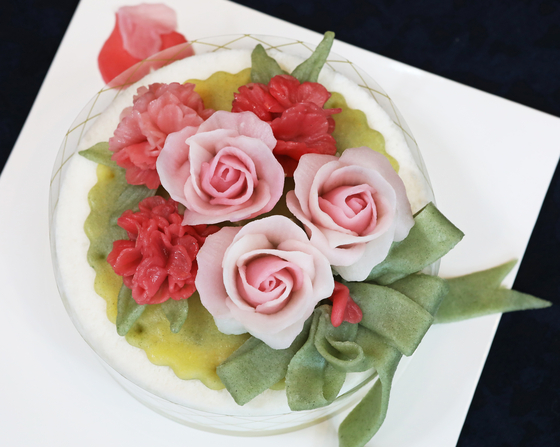 A tteok cake decorated with roses made of tteok. [PARK SANG-MOON]


Kim says her greatest influence while studying tteok-making was Choi Sun-ja, dubbed the "godmother of tteok" and considered to be Korea's best tteok artisan. Choi taught Kim everything from coloring and shaping tteok to elevating it to an artistic level. On top of technical aspects, Kim also learned from Choi’s passion for tteok, which she deeply respected.

Kim and Choi still have a close relationship. The two entered the Korea Food & Tourism Expo together in 2017 and won a presidential award. Kim says she did her absolute best helping and learning from Choi during the three months preparing for the expo. Choi has a special love for Kim's exceptional diligence, which is why the two still collaborate to this day. 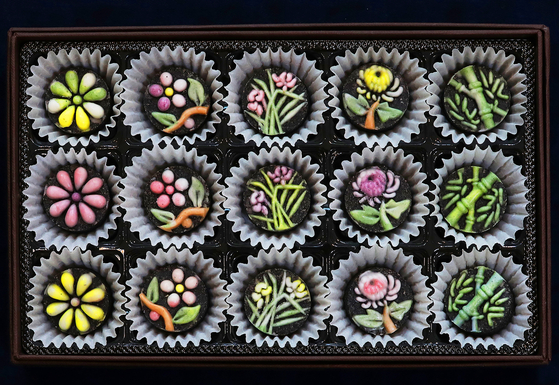 Hwajeon, also called kkotjeon, has actual flower petals embedded in the rice pancake. The flower of choice changes depending on the season, with azaleas, roses, and yellow chrysanthemums being the most popular. Adding petals to a watery dough of sticky rice and pan-frying the mix is another method to make hwajeon.

Hwajeon is a special delicacy for hwajeon nori, one of Korea’s traditional seasonal customs, also known as hwaryu nori or kkotdarim: Groups of people find a scenic spot during springtime when flowers are in full bloom, collect flower petals, and spend the whole day making and eating hwajeon. 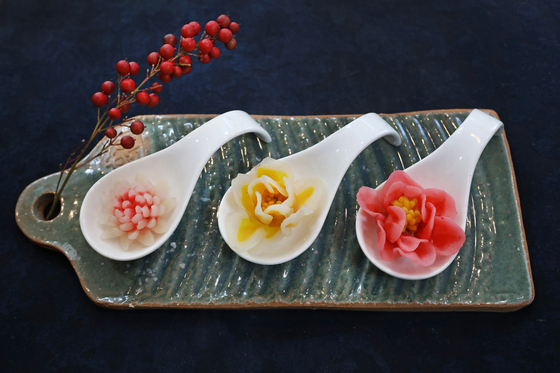 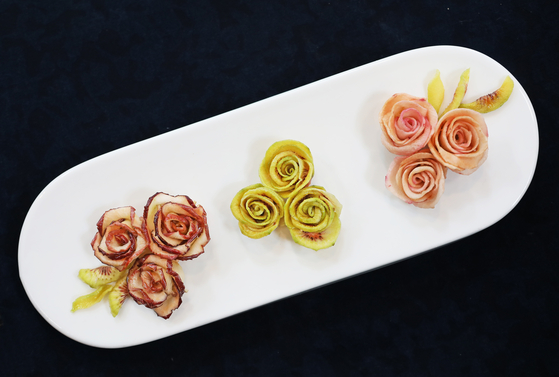 
Color is one of the most important aspects of tteok craft. Kim strictly uses natural pigments to color her tteok, mixing only five colors — pink, green, yellow, purple, and brown — to create various shades.

Kim's favorite design for tteok is flower shapes. She creates realistic tteok versions of roses, carnations, calla lilies, hydrangeas, chrysanthemums, peonies and dahlias. She is especially good at making roses, which are often the finishing touch on her tteok cakes. 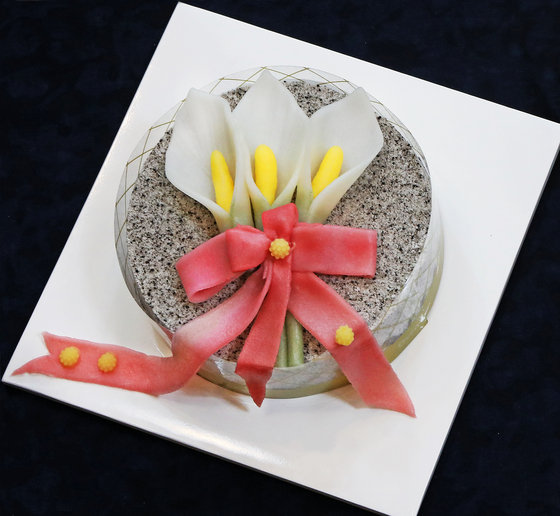 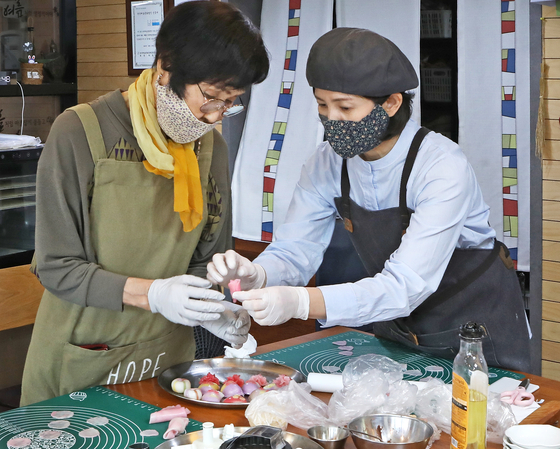 Kim’s Hwajeon Nori tteok craft workshop attracts visitors who want to learn the craft as well as tourists who visit the nearby Hwaseong Fortress. [PARK SANG-MOON]


Color, shape and taste are the most important criteria for tteok craft, but the completed tteok must also have artistic value. However, Kim says what's more important than beautiful colors and shapes is that everyone should be able to make tteok easily. Ingredients should be accessible and colors easy to make, so that tteok can be widely enjoyed. She believes her duty as the first master artisan of tteok is to carry on and develop Korea's tteok culture in a way that everyone can easily enjoy.

Tteok is all about sharing, Kim says. Koreans rarely make tteok to eat alone; it is traditionally shared during rites of passage such as the 100th day after a baby’s birth, first birthdays, weddings, and 60th birthdays which are meaningful life milestones in Korean culture. Through tteok, Kim is spreading the spirit of sharing. Everyone who visits Kim’s Hwajeon Nori workshop can have a taste of Kim's beautiful tteok.

Crab cakes are not enough (KOR)