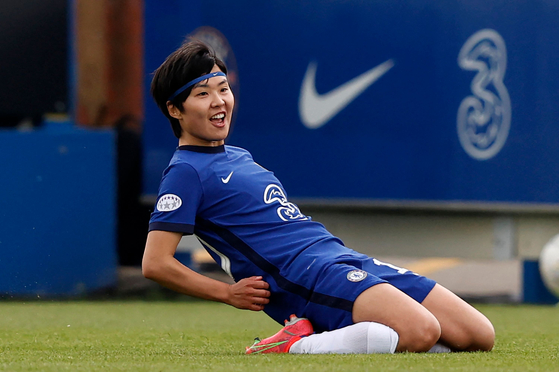 
Chelsea will take on Barcelona in the final of the UEFA Women's Champions League after beating Bayern Munich 4-1 at home on Sunday to take a 5-3 win on aggregate in the semifinals.

Korean midfielder Ji So-yun scored her first goal of the tournament in the semifinal clash, as the London club looks to win the continental title for the first time.

Chelsea got things started early on Sunday, with Fran Kirby scoring the opening goal just 10 minutes into the game to give the British side a 1-0 lead. Bayern responded in the 29th minute with a Sarah Zadrazil goal off the crossbar from 23 meters (25 yards) to level the playing field.

It was Ji who finally broke through for Chelsea in the 43rd minute, picking up a deflection from her own free kick and sending it right back toward the goal, where it trickled across the line for a 2-1 lead.

Ji's goal gave Chelsea the lead going into the break and the damage was done. Despite a series of opportunities, Bayern are unable to convert for the rest of the game and two more goals from Chelsea — in the 84th and 90th minutes — secure the victory.

Chelsea lost the first leg of the semifinal 2-1 in Munich in April, but ended the round with a big 5-3 win on aggregate to earn a place in the Champions League final.

Chelsea will face Barcelona in the final at Gamla Ullevi in Gothenburg, Sweden, on May 16. Barcelona won their semifinal against Paris 3-2 on aggregate.

Chelsea F.C. Women have won the Women's Super League three times and the FA Cup twice, but have never made it beyond the semifinals at the Champions League.

Ji, the all-time top goal scorer for the Korean national team, has played for Chelsea since 2014. She scored the winning goal in 2015 FA Cup Final and has previously been named the Player's Player of the Year.