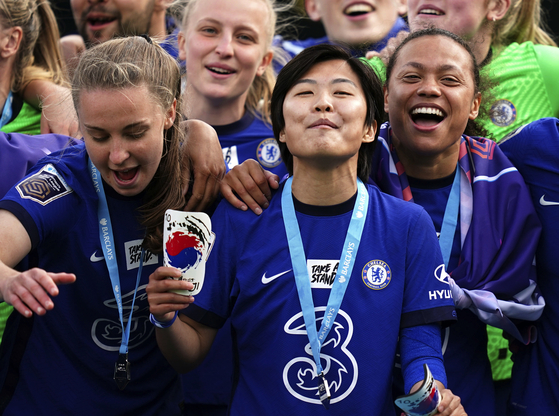 
Chelsea trounced Reading 5-0 on Sunday to win the Women's Super League for the second year in a row, narrowly beating Manchester City to the title with 57 points to 55.

The London club have now won the league title four times in the past six seasons, with star Korean midfielder at the center of the squad for all four of those seasons.

Chelsea's first Super League title came in the 2015 season, followed by wins in 2017-18, 2019-20 and now 2020-21. After winning last year's shortened season on points-per-game due to the Covid-19 pandemic, Chelsea's back-to-back win this year was a chance to prove they really were the league champions.

“In some people’s eyes we didn’t really win it, we were given it on a points-per-game scenario,” manager Emma Hayes said after the game. “To say, actually, we are the champions, that’s a validation."

Ji has established herself as a key playmaker for Chelsea. In starting 16 games this season, the 30-year-old scored two goals and picked up one assist, but created 23 chances with 84 percent pass accuracy. While she scored six goals each in the 2017-18, 2018-19 and 2019-20, this season Ji has settled down as more of an anchor for the midfield than a big offensive player in her own right.

Ji, the all-time top goal scorer for the Korean national team, has played for Chelsea since 2014. She scored the winning goal in 2015 FA Cup Final and has previously been named the Player's Player of the Year.

With the Super League now finished, Chelsea will next week face Barcelona in the Champions League final.