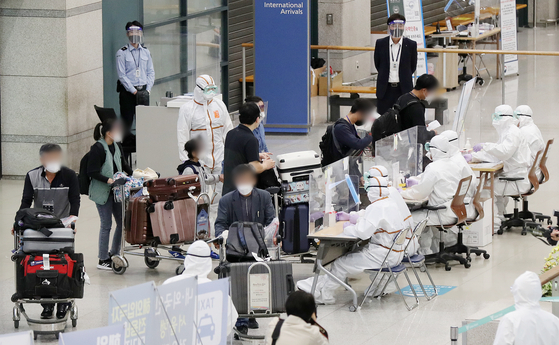 A group of some 170 Koreans arrive from India, a virus hotspot, on a special flight Tuesday morning at Incheon International Airport. More than 200 Koreans are booked to return on another special flight Friday. [NEWS1]


Some 170 Koreans residing in India, a Covid-19 hotspot which may have produced a more transmissible virus variant, returned home Tuesday on a special flight.

The Central Disaster and Safety Countermeasures Headquarters said Tuesday that a special flight operated by Indian air carrier Vistara landed at Incheon International Airport around 10:15 a.m. carrying 172 people including employees of Hyundai Motor, business travelers and students after departing from Chennai International Airport in southern India. There were 175 people expected to board the plane but three were confirmed Covid-19 positive at the last minute.

Another 211 Koreans are expected to return Friday departing from Bangalore International Airport on another special flight by Asiana Airlines.

India has reported more than 300,000 new Covid-19 cases per day for over a week and over 3,000 deaths daily. India’s official tally of Covid-19 cases surpassed 20 million Tuesday, nearly doubling in the past three months, while the country recorded more than 220,000 deaths.

Regular flights between Korea and India were suspended in March 2020 due to the pandemic. Since April 24, the Korean government has also suspended non-scheduled flights from India, allowing the operation of special flights for Korean residents to return home on a limited basis.

Passenger jets bound for Korea from India are required to fill fewer than 60 percent of their seats, and at least 90 percent of those seats must be occupied by Korean citizens. All passengers are required to show a certificate proving they tested negative for Covid-19 within the past 72 hours and undergo temperature checks.

The government said another 10 special flights will be operated this month to bring more Koreans out of India.

The Korean Foreign Ministry confirmed Tuesday that 148 Korean residents in India were infected with Covid-19 as of Monday.

The Korean government said last week it will send India oxygen concentrators, Covid-19 diagnostic kits and other medical items to help it deal with the surge in infections.

There were six more fatalities, raising the total death toll to 1,840. 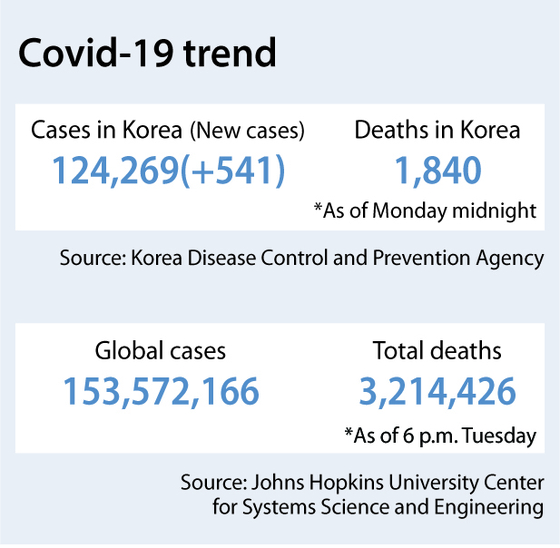 The KDCA said it has identified 97 more cases of coronavirus variants, including 75 local transmissions, bringing the total variant cases to 632.

Other than the more transmissible variants from Britain, South Africa and Brazil, there are 473 emerging variant cases.

More countries have reported cases of a highly infectious coronavirus variant first identified in India. Health officials said Tuesday that 33 such emerging variant cases are thought to have originated from India.

Seoul reported 182 new cases and Gyeonggi 117, but there has also been a spike in infections in regions outside of the metropolitan area.

At least 43 foreign migrant workers in Gangneung, Gangwon, tested positive for Covid-19 as of Tuesday.

The doses will be used to inoculate members of the public 75 and over and other vulnerable groups, as part of the government’s vaccination targets for the second quarter of the year.

The vaccines are a part of an contract between the Korean government and Pfizer to supply vaccines for 3.5 million people, or 7 million doses.

Under the contract, Pfizer has shipped vaccines for 1 million people, and shipments for 875,000 people are set to roll in later this month and 1.625 million people in June, said the KDCA, or enough doses to inoculate over 1.2 million people. The latest Pfizer vaccines will arrive at Incheon Airport by UPS early Wednesday.

Amid concerns over vaccine supply shortages leading to a temporarily halt in the administering of first Pfizer jabs in some cities, the KDCA said Monday that vaccines to cover 14.2 million people from Pfizer and AstraZeneca will roll in over May and June, enough to vaccinate some 13 million people by the end of next month.

The country has inoculated over 3.46 million people since late February, including 66,920 on Monday. A total of 4.12 million doses of vaccines had been shipped in as of Monday.

Korea has signed contracts for Covid-19 vaccines to inoculate 99 million people — 10 million under the Covax Facility and 89 million through contracts with five pharmaceutical companies. This includes 33 million from Pfizer, 10 million from AstraZeneca, 6 million from Johnson & Johnson’s Janssen, 20 million for Moderna and 20 million Novavax. All the vaccines, except Janssen’s, require two-dose regimens.