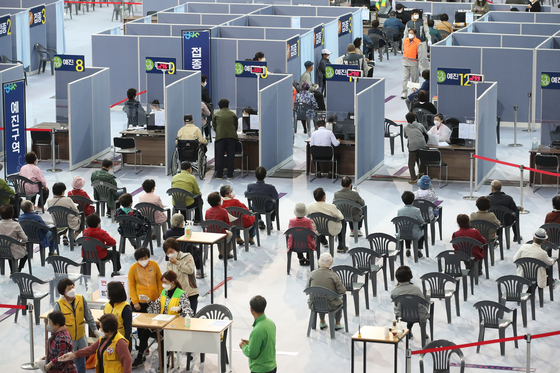 Seniors aged 75 and over wait to get their first Pfizer jabs at a Covid-19 vaccination center in Suseong District, Daegu, Thursday. Vaccine registrations for members of the public aged 70 and 74 were opened Thursday. [NEWS1]


Seniors between 70 and 74 faced system errors trying to book Covid-19 vaccinations online Thursday in cities nationwide, the first day reservations were open to members of the public in that age group.

A flood of inquiries were made to Gwangju health centers as seniors were unable to book vaccine appointments online, and they were told to try contacting call centers operated by regional governments, or to visit local community centers in person to make reservations.

North Chungcheong also faced similar system issues at around 10 a.m. Thursday morning for around 20 minutes. Online reservation websites were likewise frozen in hospitals and clinics in Gangwon, and similar cases were also reported in Busan.

Health officials confirmed that as of Thursday afternoon the online reservation system was back to normal.

The elderly aged 75 and over have been vaccinated since the beginning of April with Pfizer shots. Vaccine registrations opened Thursday to the next group of seniors aged 70 to 74, who will be getting AstraZeneca shots.

The government earlier this week decided to expand its vaccination targets for the second quarter, which runs through June, to include inoculations for members of the public aged 60 to 64.

Urging seniors to register for vaccine shots, Jeong Eun-kyung, commissioner of the Korea Disease Control and Prevention Agency (KDCA), at a briefing by the Central Defense Response Headquarters Thursday, said, “The benefits of vaccination to protect individuals’ health and prevent deaths far outweigh the vague fears and worries.”

She noted that 26.9 percent of Covid-19 patients occur in people over 60, but that 95.4 percent of deaths from the virus were in that age group.

Those in the target groups can make appointments through a mobile app or website, by phone or by visiting a local community center. Vaccines will eventually be administered at some 13,000 centers nationwide. As of Thursday, 261 vaccination centers are in operation nationwide.

This comes amid concerns over the country's vaccine supplies running low.

The KDCA confirmed that 436,000 additional doses of the two-dose regime Pfizer vaccine arrived in Korea Wednesday as scheduled, bringing the total Pfizer doses supplied to the country to 4.6 million doses.

Jeong said 7 million doses of the AstraZeneca vaccine will be supplied between May 14 and the first week of June, while the Pfizer vaccine will roll in on a regular basis through June.

Over 3.56 million people received at least their first jab as of Wednesday midnight, or around 6.9 percent of the country's total population.

There have been 88 deaths reported following vaccinations so far, although causalities have not been determined, according to health authorities.

A doctor in his 50s working at a hospital in Ulsan died two days after getting the AstraZeneca vaccine Wednesday, and health authorities are investigating any association with the inoculation.

The Ulsan metropolitan government said Thursday that the doctor was found dead in a resort in Gyeongju, North Gyeongsang, by his family members on Saturday. The doctor received his vaccine shot on April 29, and no abnormal reactions were reported. He took medication for high blood pressure but did not have any other underlying conditions.

There were four more fatalities, raising the total death toll to 1,851.

While cases were down from the previous day, less people got tested Wednesday, a holiday marking Children’s Day.

There were 12 new imported cases.

The Lotte Department Store's main branch in Sogong-dong in central Seoul closed its doors Thursday for disinfections and Covid-19 tests after 12 people were confirmed Covid-19-positive after a cluster of infections broke out in the food hall on the basement level. After the first case on May 1, 636 contacts have been tested.

Another cluster also broke out at the basement food hall of Shinsegae Department Store's branch in Seocho District, southern Seoul, though employees other than the two infected cashiers tested negative so far. Such department stores are difficult to ventilate because of a lack of windows and are often crowded with people.