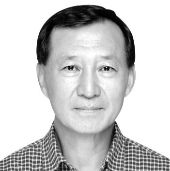 Lee Chil-gee
The author is Munhaeng Chair Professor of computer science and engineering at Sungkyunkwan University.


The struggle over hegemony in chip making between the United States and China, which originated with a shortage of semiconductors for cars, has spilled over to the computer and telecommunication fronts. The contest has extended to the defense field on a global scale. American chipmakers Intel and Micron as well as world’s top foundry Taiwan Semiconductor Manufacturing (TSMC) vied with aggressive investment schemes to have the upper hand in the race for chip supremacy.

U.S. President Joe Biden stands at the forefront to contain China’s chip ascension. He doubled down on export curbs on proprietary U.S. chip technology and manufacturing equipment to China. Biden has been courting foreign chipmakers to expand manufacturing facilities in the U.S. through attractive tax incentives. The European Union also went on to strengthen self-sufficiency on chips by investing a whopping $150 billion to cover 20 percent of the global chip output.

Semiconductors are the mainstay of South Korea, accounting for 19.4 percent of the country’s exports. Chip trade has been extending a surplus streak since July last year. Samsung Electronics maintain a comfortable lead in DRAM and NAND flash memory. Its share in foundry, or consigned production for system chips, stops at 17 percent, far behind pure-play leader TSMC that commands 54 percent.

The chip industry is primarily led by fabless designers and foundries that make chips upon order. Then there is full-services chipmaker Samsung Electronics capable of designing and selling its own chips as well as manufacturing on a contract basis. Chip design requires engineers and software programmers. Manufacturing demands more complex material and machinery technologies and science in physics, chemicals and petrochemicals. Samsung Electronics needs a large pool of experts to hone its manufacturing capacity. But government and academic backup remains lacking.

The Ministry of Trade, Industry and Energy has been promoting IC design education center programs at universities to groom chip designers for more than 20 years. The program has helped boost Korea’s chip-making capacity. But in the manufacturing field, only a few universities can support a small group for training in wafer fabrication lines.

Samsung Electronics has vowed 133-trillion-won ($118 billion) spending through 2030 in system chips whose market is triple memory’s. With the aim to hire 15,000 workers in the field, the company has been increasing recruitment.

To achieve the goal, the country must produce skilled engineers. Samsung Electronics should consider sharing its idled fab facilities with universities and participate in maintenance and training programs so that human resourcing can be balanced for chip design and manufacturing.

For production lines that cannot be publicly shared for corporate secrecy, Samsung Electronics could consider creating easy-to-learn simulation or virtual reality augmentation programs. It could publicize them at online and offline science museums so that chip production can draw interest and support.

Semiconductors will become more important in future technologies to power Big Data, artificial intelligence and Internet of Things and apply to automated vehicles, smart city and defense and space projects. Chips are not just an industry but a core part of strategic infrastructure that can define military and security capabilities.

Samsung Electronics must be addressed not just as a company, but in national strategic context for survival. The Industry, Education and Science and ICT ministries must unite to launch a chip taskforce and connect with companies and universities.