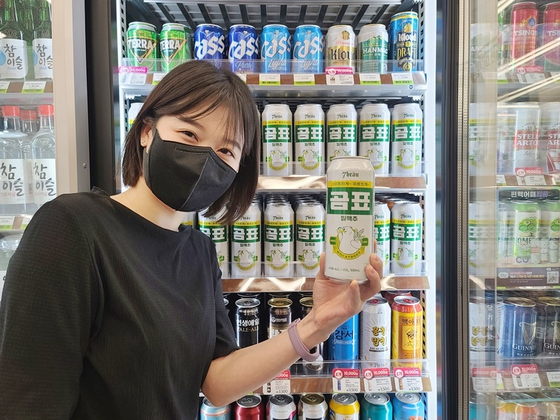 
Convenience store CU’s 7Bräu Gompyo Wheat Beer has reached No.1 in sales in the beer section, beating out foreign competitors and traditional leaders like Cass and Hite.

The achievement is a significant one in the industry, as 7Bräu Gompyo Wheat Beer, commonly known as Gompyo beer, was the first craft beer introduced by a convenience store brand.

For more than 30 years, convenience store beer sections were dominated by steady sellers by leading alcohol companies like Oriental Brewery’s Cass and Hite Jinro’s Hite, and recently, by foreign makers.

Rolled out in May 2020, Gompyo beer was collaborative work of CU, flour company Daehan Flour Mills and local brewery 7Bräu.

The artwork for the beer’s packaging was motivated by Daehan’s 55-year flour brand Gompyo, which is famous for its distinctive white bear logo. Gom of Gompyo means bear in Korean. CU chipped in product development with 7Bräu, which took charge of production.

Gompyo beer was immediately popular. The first 100,000 cans sold out just three days after its May 2020 introduction and its scarcity provoked posts on social media as people went on tours around CU convenience stores to find them.

High demand wasn’t the only reason Gompyo beers were so hard to get. Its manufacturer 7Bräu was a small brewery with limited production facilities and could only produce up to 200,000 cans per month.

Under Korean law, beer manufacturers were not able to use facilities of other alcohol producers. But that regulation changed this year, allowing CU and 7Bräu to boost production capacity 15 times to 3 million cans a month using Lotte Chilsung Beverage’s facilities.

On April 29, the first 3 million Gompyo beers were distributed to CU stores. Two days later, the product became the No.1 bestselling beer at the convenience store.

“Gompyo beer is changing an old paradigm in the convenience store beer market—it discovered demand that was hidden before its release,” said Lee Seung-taek, a beverage merchandise at BGF Retail, CU’s operator.

“As more customers search for beer with new flavor, we will continue launching products with innovative ideas.”

As a result, craft beer sales at CU between April 29 and May 4 jumped 365.5 percent on year. The portion of craft beer to all beer sales during this period reached 28.1 percent from 11.9 percent during the same period last year.