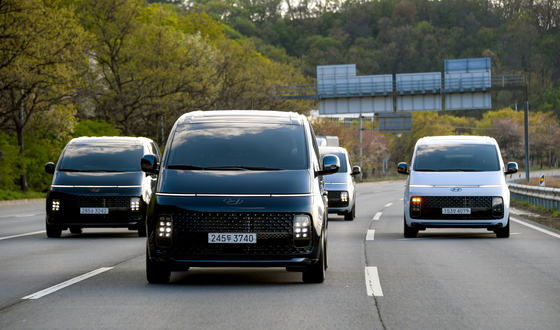 
Minivans are not exactly sophisticated.

In Korea, a minivan is about utility not style. They're typically used for commercial purposes, like delivering packages or serving as small buses for kindergartens or Taekwondo academies.

At least that was the case for Starex, the now suspended minivan from Hyundai Motor, which served such purposes for the past 35 years of its lifespan.

The Staria, however, a new minivan from Hyundai Motor that launched last month, delivers just the opposite values.

The Korea JoongAng Daily recently got to experience the seven-seater Staria Lounge, riding in the backseat on a 70-kilometer (43-mile) route in the Greater Seoul area.

At first sight, there was no doubt that this car is the most futuristic looking vehicle on the road at the moment.

Not even the Ioniq 5, the much-hyped electric vehicle (EV) from Hyundai Motor, can beat this Staria in terms of progressiveness in its exterior design.

Inspired by a spaceship, it has a simple streamlined silhouette with slim, sharp horizontal LED headlamps that cross the hood. Underneath the headlamps, the turn signals are comprised of multiple cube-shaped lights on each side.

The taillamp is unique, with its long, vertical shape.

The interior is defined by space and functionality, with plenty of room provided for passengers and a lot of storage.

The Staria is bigger than the Starex.

The new car is 55 millimeters (2 inches) taller, at 1,990 millimeters. The inside height comes to 1,379 millimeters, tall enough for kids to hop straight into the van without having to duck their heads.

Thanks to the two windows on the roof and the enlarged windows on the side, which have gotten vertically longer, a near panoramic view is secured, even from the backseat. 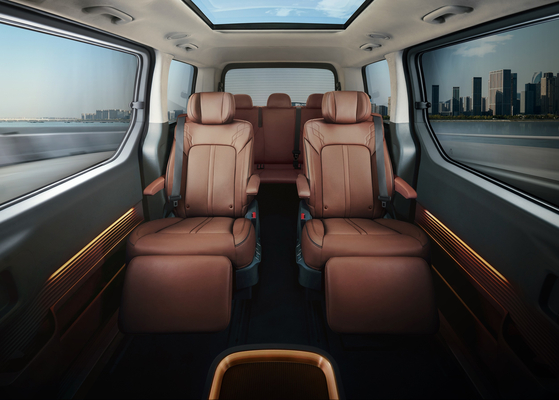 When no one is sitting in the third-row seats, the second-row can be reclined to near flat with the push of a "relaxation" button. Cushions for leg-rests pop out from the bottom with the push of another button to guarantee a near lying-down position for passengers.

The wing-type headrests add to the relaxing mood in the backseat.

From the driver's seat alone, there are at least three cup holders available: On the dashboard on the left side of the steering wheel, in the center fascia that pops out with a gentle push and inside the center console.

The conventional glove box on the passenger seat is also still present.

The vehicle has a pretty high-tech 10.25-inch digital cluster placed on top of the dashboard behind the steering wheel and another 10.25-inch infotainment screen in the center, with a set of analogue buttons underneath.

Through a camera installed on the ceiling of the second-row seats, the driver can inspect what's going on in the backseat with live visuals available on the infotainment screen.

The nine-seater version of the Staria Lounge comes with what's called "Swiveling Seats," where the second-row seats can be swiveled 180 degrees to face the third-row seats for more convenient communication.

Hyundai Motor said it will soon launch the Staria Limousine model, which has a high roof and comes with more premium functions.

By the latter half of 2023, the Korean carmaker said it will launch a fuel-cell electric version of the minivan, followed by a hybrid version.
The seven-seater Staria Lounge has a sticker price of 41.3 million won ($37,000). 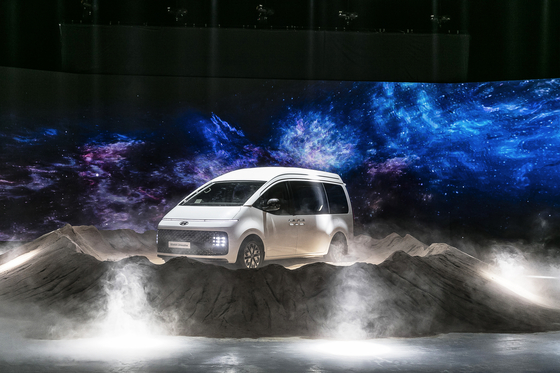 A Staria is born