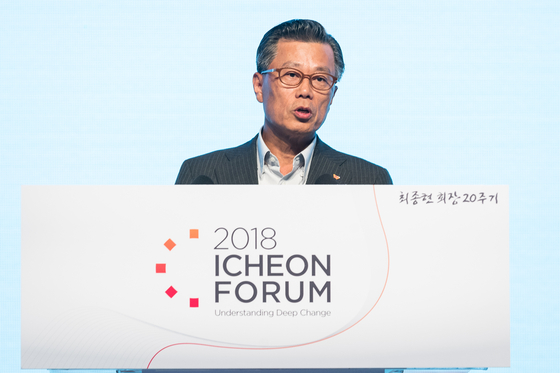 
The prosecution said Friday that Cho Dae-sik, the second highest executive of SK Group, was questioned as a suspect of a criminal investigation.

According to the Seoul Central District Prosecutors’ Office, Cho, chairman of the SK Supex Council, came to the prosecution and submitted to the questioning in the morning. The council is the highest decision-making body of the conglomerate.

The questioning is a part of an investigation into allegations that Choi Shin-won, CEO and chairman of SK Networks, set up slush funds overseas. Choi is a son of late SK Group founder Chey Jong-gun and a cousin of SK Group Chairman Chey Tae-won.

The prosecution believes that Cho committed a breach of trust in 2015 when he was serving as the chairman of the board of directors of SKC, a chemical manufacturing arm of SK Group.

In April 2015, Cho approved an investment of 70 billion won ( $62.5 million) into SK Telesys, although the communication equipment manufacturer was on the brink of bankruptcy. Choi was the chairman of SK Telesys when the dubious investment was made.

The prosecutors said the investment incurred a massive loss to SKC, a listed company, and they will ask Cho about the decision-making process of the dubious investment.

Choi was indicted in March on charges of embezzlement and breach of trust related to the creation of slush funds. He was accused of creating slush funds worth 223.5 billion won by embezzling money from six SK affiliates including SKC and SK Telesys.

Choi’s trial began in April. He denied most of the charges against him.

Clear up the suspicion

Clear up the suspicion (KOR)

'In Our Prime' tops box office for two days straight