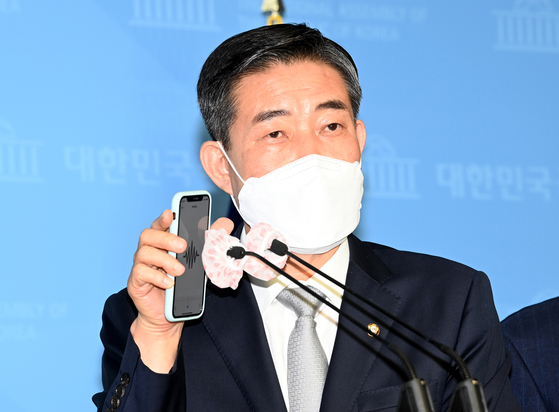 Rep. Shin Won-sik of the United Future Party (UFP), which later changed its name to the People Power Party (PPP), holds a press conference at the National Assembly on Wednesday. [YONHAP]


An Army captain admitted to having received a phone call in 2017 from an aide of Choo Mi-ae, the current minister of justice, to extend her son’s medical leave when he failed to return to the base in time, an opposition lawmaker said Wednesday.


Rep. Shin Won-sik of the United Future Party (UFP) called a press conference Wednesday to release what he said were transcripts of conversations between his aide and multiple military officials who supervised Choo's son. He did not release the military officials' names or take any questions from reporters, but did play audio excerpts of the interviews, including the Army captain's comments.

In 2017, Choo was chairwoman of the ruling Democratic Party (DP), while her son, whose surname is Seo, was serving his military duty in the Korean Augmentation To the United States Army, or Katusa, for the 2nd Infantry Division of the U.S. 8th Army.

During her confirmation hearing in December, Choo denied accusations by opposition lawmakers that Seo had received special treatment due to her position. They have claimed that Seo was reported AWOL after failing to return to his unit in time after a medical leave in June 2017, but that a senior officer had mysteriously granted an extension. They said Choo must have abused her power and contacted the military for her son.

Choo repeatedly denied the allegation, which she labelled as “fiction” during a National Assembly session in July.

At the press conference, Shin, who is also a former lieutenant general in the Army, said his aide had several phone conversations with military officers who oversaw Seo’s unit in 2017. Shin said his aide talked to them on Sunday for a total of 78 minutes.

According to the transcript of the dialogue between the Army captain and Shin’s aide, the captain admitted that Choo’s aide had called him and asked if the private’s medical leave could be extended.

“At the time, I wondered why Choo’s aide was doing so,” the captain was quoted as saying in the transcript. “The job of a lawmaker’s aide is to support legislative works, but he was dealing with the private issue of the lawmaker.”

The captain told Shin’s aide that he does not remember the name of Choo’s aide, according to the transcript.

Shin's aide also spoke with a former lieutenant colonel who was Seo's commander in 2017, Shin said.

According to the transcript of their talks, the former lieutenant colonel said, “I think I got a phone call requesting an extension of his medical leave. I was told that the officer in charge had already rejected the request.”

“The former lieutenant colonel explained that Seo could have asked for the extension through Choo’s aide because his initial request was denied,” Rep. Shin said.

At the National Assembly’s Budget and Account Committee on Tuesday, Rep. Park Hyeung-soo of the UFP attacked Choo for having abused her power, if she had pressured the military to extend her son’s medical leave.

“Why would a lawmaker’s aide work on my personal issue?” Choo said. “It never happened.” 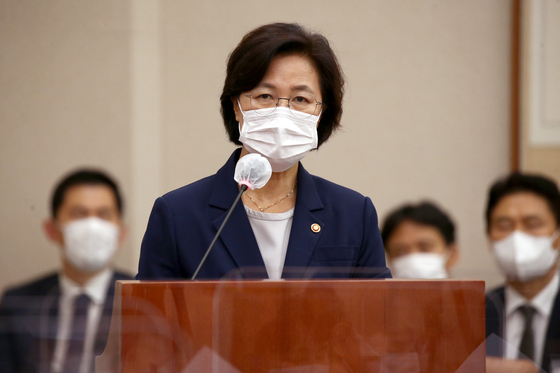 
The opposition lawmakers also planned to grill Choo on the issue at the Legislation and Judiciary Committee on Tuesday, but their attempts were blocked by the committee’s chairman, Rep. Yun Ho-jung of the DP.

“This is a warning,” Shin said. “If Choo continues to lie, I will have to make a bold decision to lay bare their dishonesty.”

Opposition lawmakers said they will file criminal complaints with the Supreme Prosecutors’ Office to investigate Seo, his military supervisors and Choo’s aide. They said no proper records exist to support Seo’s medical leaves.

“When Seo used his medical leaves and vacation days, his military supervisors exempted him from going through proper procedures,” Rep. Jeong Jeom-sig of the UFP said. “These are against the military penal code.”

According to Rep. Jun Joo-hye of the UFP, Seo served his military duty from November 2016 through August 2018. During 21 months of service, he took a total of 58 days off. In addition to the 28 vacation days, he had 11 special vacation days and 19 days of medical leaves.

According to the UFP, Seo used his first medical leave from June 5 to 14, 2017, and the second one from June 15 to 23. He was supposed to return to the unit on June 23, but did not. He spent another four days, from June 24 to 27, outside the base. The four days were marked as his vacation days.

The opposition party also said the Seoul Eastern District Prosecutors’ Office, which is currently investigating the suspicion that Seo had received special treatment, seemed unwilling to investigate the case.

“It’s been eight months since the prosecution first received a criminal complaint,” said Rep. Yun Hee-suk, deputy spokesman of the party. “But we saw no progress. Choo is the justice minister who controls prosecutors, so I guess it is impossible to expect something from them.”

Clear up the suspicion

Clear up the suspicion (KOR)