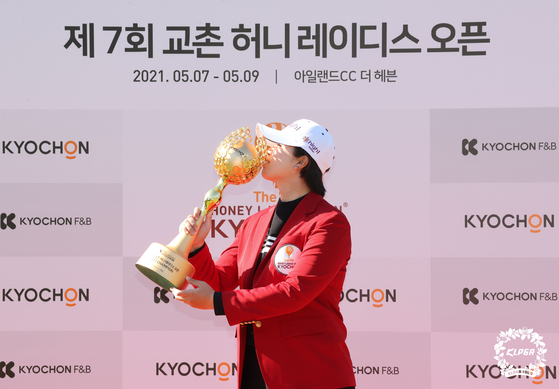 
Kwak Bo-mi picked up her first-ever KLPGA Tour victory on Sunday at the Kyochon Honey Ladies Open at the Island Country Club in Ansan, Gyeonggi.

This is the first KLPGA victory for the 30-year-old golfer since her debut in 2010.

Kwak scored three-under-par on the last day and finished nine-under-par, 207. Runner-up Ji scored an eight-under-par, 208, and Lim Hee-jung and Jun U-ree tied at third with six-under-par, 210.

Kwak has played at both KLPGA Tour events and the second division Dream Tour events throughout her career, earning three career wins in the Dream Tour but none at the KLPGA Tour — until now. Her best record had been finishing runner-up at the Munyoung Queens Park Championship in 2019.

Going into the final round tied at second with Ji Han-sol, it was a tight race.

Kwak started topping the scoreboard from the fourth hole, where she hit a long putt from outside the green and took away her first birdie of the day, outdistancing runner-up Ji by one point.

Into the second half of the final round, Kwak birdied again on the par-4 10th, widening the score difference to two.

However, Ji put herself back right behind the leader, adding another birdie on the par-4 14th.

Everything boiled down to the last hole, where it seemed like the game would take a turn of events as Kwak’s driver shot unexpectedly went to the left and bounced off the fairway into the road, rolling down and landing right next to a gutter.

Kwak managed to shoot it back to the rough right next to the green. Her next wedge shot was impeccable, meeting the rough and bouncing into the green.

“That shot was something that my caddie and I had planned,” Kwak said when asked about that last iron shot of the day. “The ball was in a big divot, and we wanted it to go low, hit the rough and land inside the green.”

As she cemented her victory with a short-distance putt, Kwak was in tears.

“I am thankful for my family members who put up with me,” said Kwak.

"I give up easily and so I kept saying that I was going to give up, but my parents convinced me to play another year. Now that I don’t need to worry about seeding anymore, I want to compete as long as I can.”

Kwak’s win comes after failing to make the cut for all three previous KLPGA tournaments.

“I think about golf all the time, even when I am not playing. I tried not to think about golf too much in my everyday life.” said Kwak when asked what was different this time, “I took up drumming to get rid of my stress."

Defending champion from 2019 Park So-yeon did not make the cut this time, shooting four bogies in both the first and second rounds. Park made her first birdie in par 4, 13 but was unable to repair the damage from the first two rounds and had to stay 111th on the board.

The KLPGA Tour will continue at the 2021 NH Investment & Securities Ladies Championship at Suwon Country Club in Gyeonggi from May 14 to 16. The upcoming tournament will also be played as a three-day, 54-hole event.