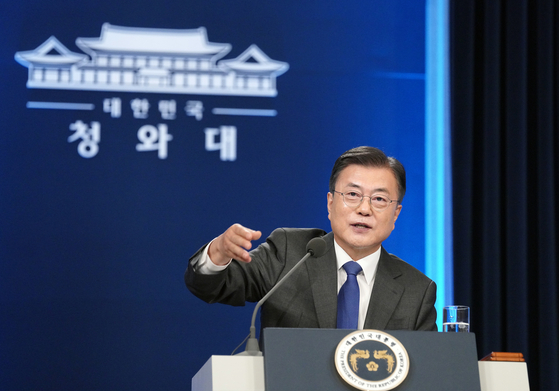 President Moon Jae-in responds to a reporter on Monday at a Blue House press conference. Moon gave a speech Monday morning to mark four years in office and held a question and answer session. [NEWS1]

"I am seeing growing demands, particularly from economic and religious communities, that Samsung Electronics Vice Chairman Lee be pardoned," Moon said in a press conference Monday morning at the Blue House. Moon gave a special address to mark four years in office and took questions from the press.

"It is an undeniable truth that we need to strengthen the competitiveness of our semiconductor industry, as global competition is getting fiercer," Moon said, referring to arguments that Lee be granted a special pardon to help Korea maintain its dominance in semiconductors. "I also have to think about the fairness issue, cases in the past and public sentiment. A pardon is a president's prerogative, but I don't think I can make the decision as I like. I will seriously consider the people's opinions and make a decision."

Lee is in jail for bribing President Park Geun-hye through her friend Choi Soon-sil. He has 15 months left to serve in a sentence of two and a half years.

Moon also admitted that many people want former Presidents Park and Lee Myung-bak to be pardoned, while many others oppose it. A decision will be made based on how it will improve national unity and address public sentiment, he said.

It was apparent that Moon's position on the pardons has shifted. During a New Year's press conference in January, he flatly rejected the possibility of releasing the former presidents, saying it was premature to talk about it.

Since last week, however, top ruling party politicians such as Prime Minister-designate Kim Boo-kyum promoted the idea of a pardon for Lee to help Korea get ahead in the global semiconductor war.

Opinion polls show support for a Lee pardon. In a Data Research survey conducted on April 26, 71.2 percent of respondents said they supported Moon granting a pardon to Lee. Other polls conducted last month had similar outcomes.

In his speech Monday morning, Moon stressed the importance of the semiconductor industry to the nation's economy. "Our semiconductor manufacturers have been firmly maintaining the world's No. 1 position by increasing exports for 10 consecutive months, and even system semiconductors are growing as one of our country's flagship export items," Moon said.

"While solidly keeping the status of our semiconductor industry as the world's best, we will safeguard our national interests by using the current semiconductor boom as an opportunity for a new leap forward."

At the press conference, Moon refused to budge on cabinet nominations, criticizing opposition lawmakers for using confirmation hearings to attack his picks. "I don't think the Blue House vetting process was a failure just because opposition politicians protest my nominees," he said.

Moon said he selected the candidates because they had the best professional abilities, and lawmakers must consider his intentions, not just flaws. He said he will make decisions on the controversial nominees' fates after the National Assembly wraps up its deliberations.

While Moon can appoint ministers without the National Assembly's blessing, appointing a prime minister requires one. The ruling Democratic Party (DP), however, has enough lawmakers alone to endorse the appointment.

At Monday's press conference, Moon admitted that he has lost his four-year war against rising real estate prices. "The last by-election defeats were a severe punishment for the failure," Moon said.

A new policy should be used in his final year, Moon said, adding that the administration and the ruling party are discussing some changes.

Over the past four years, Moon has vowed to curb skyrocketing real estate prices but failed. His policies concentrated on punishing owners of multiple properties with heavier taxes and tighter restrictions on loans, although analysts and the opposition PPP said increases in supplies were the key to lowering prices.

In his speech, Moon admitted to the importance of greater supplies. "In addition to private-sector housing supplies, public-led housing supply measures will be implemented as planned without disruption," he said. "We will expand various policy support measures to ease burdens on genuine would-be homeowners so that low-income households, newlyweds and young people will be able to realize the dream of purchasing their own homes."

"Vaccinations have made it possible to embark on the long journey to return to normal everyday life," he said. "Still, it is true that it would have been better if inoculations could have commenced a little bit earlier."

Moon said the government has revised its goal upward to vaccinate more than 13 million people by the end of June. "The administering of the first dose to everyone in the population who is eligible will be completed by the end of September, ensuring that herd immunity is achieved before our original target of sometime in November," he said.

The PPP said the economy was recovering because of the private sector's accomplishments, particularly in shipbuilding and semiconductor companies. "It has nothing to do with the government, but Moon is embarrassingly trying to take credit for it," said PPP spokesman Rep. Bae June-young.