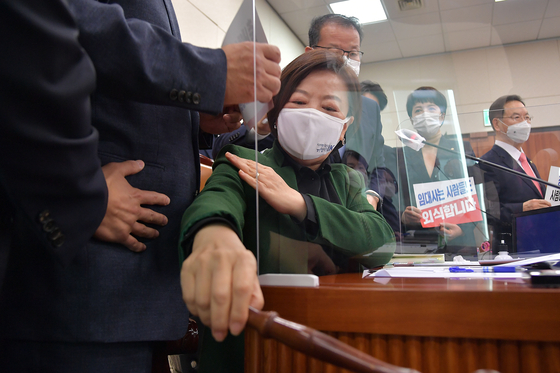 
President Moon Jae-in on Monday formally appointed Byeon Chang-heum as his new land minister, after the ruling party used its majority to approve a supportive confirmation hearing report for the embattled nominee.

The Land, Infrastructure and Transport Committee held a meeting in the morning and held a vote to endorse the confirmation hearing report on Byeon to head the Ministry of Land, Infrastructure and Transport. Lawmakers from the opposition People Power Party (PPP) surrounded Chairwoman Jin Sun-mee of the ruling Democratic Party (DP) to physically block her from holding the vote, but the DP pushed forward with the process. Of the 26 lawmakers who attended the meeting, 17 DP lawmakers voted to confirm Byeon.

It is the second time in the 21st National Assembly that the DP used its majority to adopt a contentious confirmation hearing report. The first was for Unification Minister Lee In-young in July.

The committee held its confirmation hearing on Byeon, nominated by Moon earlier this month, on Wednesday. They held a meeting on Thursday to discuss his fitness for the job, but failed to reach a conclusion and postponed the decision to Monday. 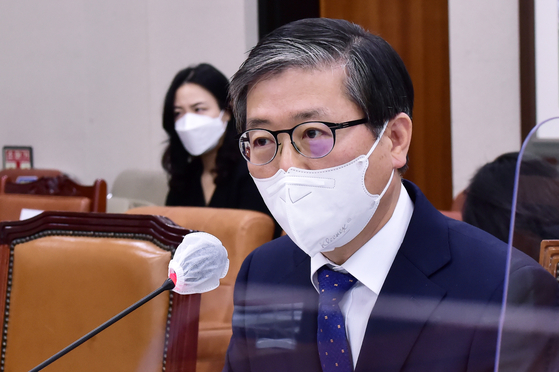 Byeon Chang-heum, the land, infrastructure and transport minister-nominee, speaks during his confirmation hearing at the National Assembly on Wednesday. YONHAP]


Ever since his nomination, Byeon has been the subject of criticism of his remarks on the death of a subway maintenance worker at Guui Station in 2016. Opposition lawmakers and some in the media criticized his past statements as insensitive, and he ended up issuing a public apology.

The DP said there was no problem for Byeon to head the ministry, stressing that the controversy surrounding his character is not a decision-making factor.

“Byeon offered a heartfelt apology for his past remarks that were criticized as insensitive,” said DP Rep. Kang Jun-hyeon. Referring to allegations that Byeon had illegally bypassed the normal hiring process at one of his previous posts, Kang added, “If he cannot pass the confirmation hearing for unsubstantiated accusations, [in which] no illegality was confirmed, it would be impossible to name any reform-minded officials.”

Rep. Cho Eung-cheon of the DP said there were enough debates on Byeon’s fitness for office.

“We’ve put him under a microscope, and he seemed to be misunderstood,” Cho said. “He doesn’t seem to be that bad.”

The PPP fiercely protested the DP’s endorsement of Byeon, urging Moon to withdraw his nomination. The progressive Justice Party also refused to confirm the nomination.

Chairwoman Jin said the opposition lawmakers’ opinions were noted in the confirmation hearing report for Moon to consider.

The confirmation process for a minister-level official at the National Assembly is non-binding.

Byeon was the 26th minister-level official appointed by Moon without the opposition party’s agreement — far more than past presidents.