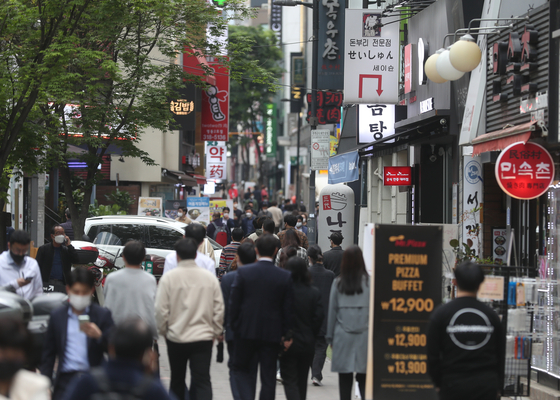 People crowd a street in Myeong-dong, Seoul, an area that was hit hard by Covid-19 outbreak. Increasing economic activity is contributing to tax revenue. [YONHAP]


Tax revenues rose in the first quarter as business recovered and on frenetic activity in the real estate market.

According to the Ministry of Economy and Finance on Tuesday, in the first three months of this year the government collected 88.5 trillion won in taxes.

That is a first quarter record and a 27.3 percent increase on year.

The collections were helped along by shop owners paying taxes again after a holiday was implemented to help them during the pandemic. They were exempt from paying income tax for three months from November.

When including the national pension and other government funds, the total collections in the first quarter came to 152.1 trillion won, which is a 27 percent increase.

In the first three months, the government collected 28.6 trillion won in income tax, up 30.6 percent on year.

Corporate tax in the first quarter came to 29.2 trillion won, a 31.2 percent increase.

According to the government, the combined operating profits in 2020 of Kospi companies with their fiscal year ending in December rose 19.8 percent to 67.5 trillion won.

Value-added taxes came to 17.6 trillion won, an 18 percent increase, indicating that spending has gone up.

While the number of Covid-19 infections continues to rise and the government is struggling on vaccine rollout, consumer spending has been recovering fast due to various factors, including people exhausted from being restricted and outdoor activities increasing with the warmer weather.

In the first three months of the year, the government spent 182.2 trillion won, which is a 10.5 percent increase year-on-year.

The spending in the first quarter in these areas ranged between 30 percent and 40 percent of this year’s total spending.

The Finance Minister noted that the spending was focused on areas that affected the daily lives of average Koreans and on the economic recovery.

A significant deficit remained as the tax take was outpaced by spending. In the first three months of the year, the deficit came to 30.1 trillion won.

The Korean government has been deficit since 2019 after achieving surpluses between 2016 and 2018.

The government stressed that the deficit is improving. Compared to the same period a year earlier, the deficit fell 34 percent from 45.3 trillion.

“As there has been an increase in various areas from income taxes, corporate taxes and value-added taxes, the fiscal deficit is shrinking,” said Na Ju-bum, head of the ministry’s fiscal innovation bureau.

He said the increases in the first three months of the year were largely due to the frontloading the budget.

“But this year there has been an increase in taxes including taxes that were suspended,” Na said. “On top of this momentum, the economy is improving and exports have been increasing since the second half of last year.”

Na noted that the increase in taxes will help the government achieve substantially in its fiscal management.

The government debt as of the first quarter came to 862.1 trillion won, with 50.4 trillion-won worth of treasuries issued.