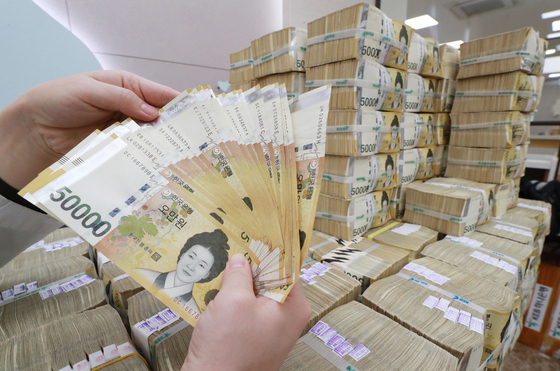 Pile of 50,000 won cash at Hana Bank in Seoul. Thanks to improvement in jobs and economic recovery as well as higher property value, the government continued to enjoy increase in their taxes. However, tax take in October alone fell due to the government suspending taxes on small busiensses impacted by Covid-19 until January. [YONHAP]

Tax collections were strong in the first 10 months of the year despite a weak October.

According to the Ministry of Economy and Finance on Thursday, in the year through the end of October, collections totaled 307.4 trillion won ($261.5 billion), up 21 percent on year.

Including non-tax revenue, such as the national pension, total government revenue in the first 10 months was 489.9 trillion won, up 19.6 percent.

In October, the tax take fell as the government suspended taxes on small and mid-size businesses hit by Covid-19. Collections of value-added and corporate taxes for these companies were suspended to January 2022.

The fiscal deficit was 19.3 trillion won, compared with 59 trillion a year earlier, and the national debt 939.6 trillion won.

While relaxed social distancing since November and the comprehensive real estate holding taxes paid in December are factors that will help increase collections, the recent surge of people infected with Covid-19 and the rise of the Omicron variant, which are forcing the government to up social distancing, are negative factors.